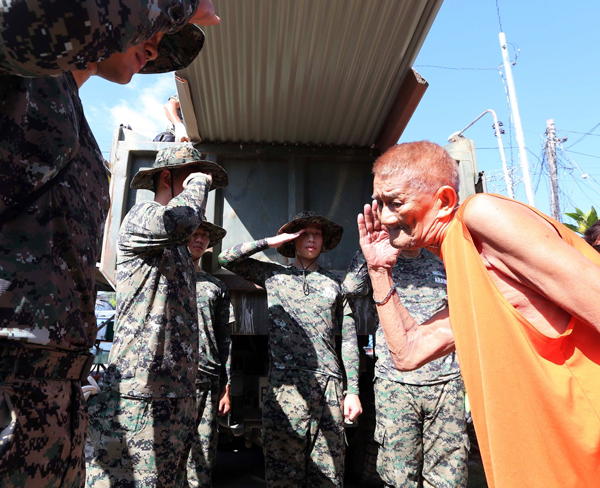 South Korean soldiers in the Araw Contingents’ relief force salute Domingo Ragaas, 88, a Filipino military veteran who fought in the 1950-53 Korean War, at a ceremony marking the 64th anniversary of the war’s start. [Joint Press Corps]

TACLOBAN - The Philippines marked the 64th anniversary of its involvement in the 1950-53 Korean War with a ceremony attended by veterans and the families of the fallen.

The Araw Contingents, also known as the ROK Armed Forces’ Joint Support Group Philippines, the relief force dispatched to Tacloban to take part in restoration work in the typhoon-battered city, held a ceremony on Tuesday to mark the 1950-53 Korean War, inviting four surviving Philippine veterans who fought for the South.

According to the unit, the ceremony was hosted to express South Korea’s gratitude for the approximately 7,420 Filipino soldiers who participated in the war, as well as to promote its ongoing efforts to rebuild Tacloban in the aftermath of Typhoon Haiyan, which ravaged the country in November 2013 and displaced more than 200,000 people.

“At the time, three battalions of the 8th division participated in the Korean War for the South. We also wish to express our gratitude to South Korea for its sincere support for the restoration of the Philippines [following the typhoon].”

South Korea sent about 520 troops to Tacloban, mostly engineers and medics, to aid local communities ravaged by the deadly typhoon. The first round of troops has been stationed in the city since December 2013. They will be replaced by a second unit at the end of this month, according to South Korea’s Ministry of Defense.

“The Philippines were a big help to us when we were suffering and desperate during the war,” said Lee Cheol-won, a South Korean colonel who attended the ceremony. “We will put all our passion and effort into the restoration to provide courage and strength to the local people who have suffered from the damage wrought by the typhoon, so as to repay the sacrifices of the Filipino soldiers who participated in the war.”

The Araw unit also presented a university scholarship worth 10,000 pesos ($227.62) and a laptop to each of the families of the eight former veterans who still reside in the city. Four of those soldiers still survive.

The four retired Filipino veterans said they were proud of the economic development South Korea has accomplished since they left the country six decades ago.

“I applied for the Navy to participate in the Korean War,” said Domingo Teves, 85, one of the veterans. “If I were to go back 60 years ago, I would still make the same decision.”

Another veteran, Segundino Crjesola, 84, showed his certificate from the Korean War. “This is the best certificate I’ve received,” he said. “Although I was glad to receive government education subsidies for my military participation, I also feel proud of myself for my dedication to protecting democracy and the rapid economic development of Korea.”