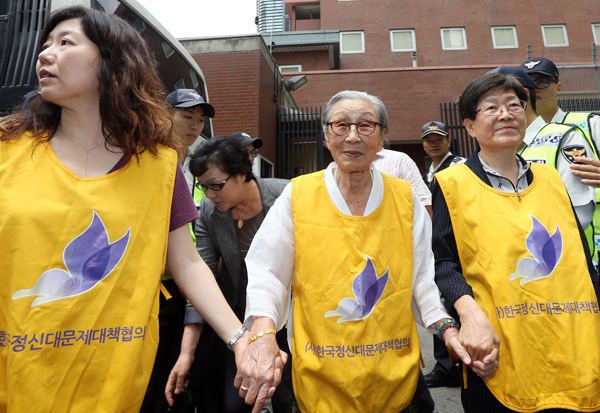 Kim Bock-dong, 88, center, who was sexually enslaved by the Japanese military during World War II, leaves the Japanese Embassy in central Seoul yesterday after protesting Japan’s review of the drafting of the 1993 Kono Statement. [NEWS1]

In Washington, Cho reiterated the importance of Japan looking history square in the face, otherwise it will lead to tension in the region and destroy trilateral cooperation between Seoul, Washington and Tokyo. The meeting comes as a panel commissioned by the Shinzo Abe administration released a report following a two-month probe that concluded there had been secret consultations between Seoul and Tokyo ahead of Chief Cabinet Secretary Yohei Kono’s delivery of the landmark apology in August 1993. The Kono Statement, delivered in August 1993, effectively acknowledged the Japanese military’s involvement in the coercion and mobilization of women into sexual slavery during World War II.

The panel’s report concluded that Korea had apparently been involved in the wording of the statement, such as the military’s involvement in the coercion of the women, and heavily emphasized the civilian-funded Asian Women’s Fund - a move that is seen in Seoul as Tokyo’s latest act to whitewash its war crime responsibilities.

Cho, who was also scheduled to meet with Daniel Russel, the U.S. assistant secretary of state for East Asian and Pacific affairs, and Glyn Davies, Washington’s special representative for North Korea policy, also spoke on other bilateral issues, including countermeasures against North Korean provocations.

The Korean Ministry of Foreign Affairs indicated that the third round of monthly director-general level meetings between Korea and Japan initiated as an attempt to resolve the “comfort women” issue is not likely to be scheduled this month in light of the report.

Yesterday, 88-year-old Kim Bock-dong, a surviving victim and a member of the Korean Council for Women Drafted for Military Sexual Slavery by Japan, visited the Japanese Embassy in central Seoul. There, she conveyed a petition that criticized the Japanese government for its report on the Kono Statement review.

The petition referenced the situation as a “blow on history” and called upon Tokyo to thoroughly examine the violence against women and war crimes committed by the Japanese government.”

Afterward, Kim joined a peaceful weekly civilian rally in front of the embassy intended to spread awareness about the fact that Japan has yet to officially apologize to or compensate the women who were sexually enslaved by its military during the colonial era. The latest move by the Japanese government to undermine the Kono Statement has drawn fierce backlash not only from countries with surviving victims, such as North and South Korea and China, but also the international press, academics and civic groups.

A group of activists, including surviving victim Gil Won-ok, 87, also held the 1,132nd Wednesday rally, organized by the Korean Council for Women Drafted for Military Sexual Slavery, yesterday in the streets of Paris, pointing to how the reexamination of the Kono Statement seemingly cast doubt over a historical truth.

“The review of the Kono Statement is nothing but an advertisement for [Japan’s] mistakes,” Gil told a group of students at the Sorbonne, a prestigious French university, on Monday.

Gil was forced into sexual slavery at the age of 13 in 1940 after being duped into believing she would be sent to a factory to work. At that time, she needed money to keep her father from jail. The activists yesterday held a public testimony, and visited the French parliament. They also organized campaigns in front of the Eiffel Tower and other key locations and spoke with government officials, rights activists and students.

Last week, Gil and the Korean Council for Women Drafted for Military Sexual Slavery by Japan delivered a petition, signed by 1.5 million people, to the UN Human Rights Council in Geneva that called for a resolution.

The civic group will head on to Belgium, Germany and the Czech Republic to continue their campaign across Europe.

Japan usually waits 30 years to reveal government documents, though the report unilaterally reveals the content of negotiations between Korea and Japan. In its Asia edition, the Wall Street Journal published a front page article yesterday entitled, “Justice Eludes Comfort Women,” that pointed out that the investigation into how the apology was composed implied “what looks like genuine remorse, [but is] in fact a diplomatic fudge.”

The article, which expands upon the comfort women issue in China, said that the review “encourages Japanese rightists who depict comfort women as commercial prostitutes and say Japan has been unfairly blamed.”

The New York Times also published a biting editorial on Sunday that asserted, “Japanese nationalists will undoubtedly use the report to push the government to retract the apology. It’s time Mr. Abe made it clear to his country and to the world that the ‘deniers’ are wrong.”