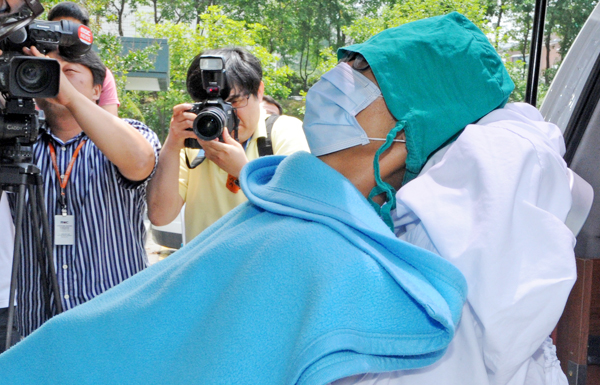 The 22-year-old Army sergeant who carried out a shooting spree Saturday is transported yesterday from Gangneung Asan Hospital to a military hospital. [NEWS1]

The 22-year-old Army sergeant who carried out a deadly shooting spree Saturday evening at a remote outpost told interrogators from his hospital bed that he was upset at lower-ranking soldiers who ignored him, testimony that backs up previous media reports that he was isolated from fellow soldiers.

The JoongAng Ilbo reported today, citing an unnamed military officer, that the sergeant told military interrogators he was upset over mistreatment from the lower ranks, but the officer refused to go into further detail of what drove the sergeant to open fire at a general outpost in Goseong County, Gangwon, on Saturday evening. The sergeant of the Army’s 22nd Division, identified by his surname Lim, threw a grenade and opened fire at his fellow soldiers, killing five and injuring seven others.

He is recovering from a self-inflicted bullet wound to the upper chest, an unsuccessful attempt at suicide that ended a 23-hour standoff between him and military Monday on a mountain in Hyeonnae-myeon, Goseong County.

“Even after we get testimony from Lim’s fellow soldiers who witnessed the shooting spree, we will not have a full picture of what really happened without the suspect’s full testimony,” said an officer involved in the investigation. He said the investigation could take longer than expected if Lim continues to remain tight-lipped.

But Lim’s comment that he was angry with the lower ranks strengthened speculation this week that he was isolated from other soldiers in the unit or somehow ostracized. Of the five soldiers he killed in the shooting rampage Saturday, two were first privates while the other two were corporals. The fifth victim was a staff sergeant, one rank up from Lim’s. “It is not clear yet whether Lim intended to kill the five victims,” said the official.

Although the Ministry of National Defense officially refuted reports that a note Lim scrawled shortly before trying to kill himself Monday suggested he was mistreated by fellow solders, a number of local newspapers reported that the sergeant wrote that anyone would have done what he did if they were forced into his situation, citing unnamed military sources.

Lim was transferred from the civilian Gangneung Asan Hospital to Armed Forces Gangneung Hospital yesterday, where he is expected to face intense questioning over the motive behind the fatal shooting spree.

Meanwhile, relatives of the men killed and wounded refused to allow a joint funeral ceremony scheduled for 10 a.m. today and demanded a meeting with Defense Minister Kim Kwan-jin to protest a remark Kim made Wednesday.

During a special parliamentary inquiry into the June 21 rampage, Kim, who also serves as the president’s security adviser, told lawmakers, “Of the many reasons that could have led to the rampage, it could have been exclusion by the group.”

The relatives are worried that the victims may be portrayed as having brought on their own deaths by bullying or otherwise alienating the troubled soldier. The relatives’ concerns stem from two previous shooting sprees at military units in 2011 and 2005. In both cases, the shooters told interrogators that they were isolated from other soldiers and suffered in the strict, hierarchical military culture.

The family members are also upset with the Defense Ministry’s announcement Wednesday that it decided not to reveal the contents of Lim’s suicide note because of strong objections by the relatives. The families denied yesterday that they had made such a demand and accused the military of fabricating the claim.

Facing such a protest, the military backtracked yesterday, saying the relatives did not object to making the suicide note public in principle, but told the authorities that it would be better to disclose its contents after all the facts in the shooting spree have been established.