Behind the wheel of a prancing horse: Ferrari’s California T

Behind the wheel of a prancing horse: Ferrari’s California T 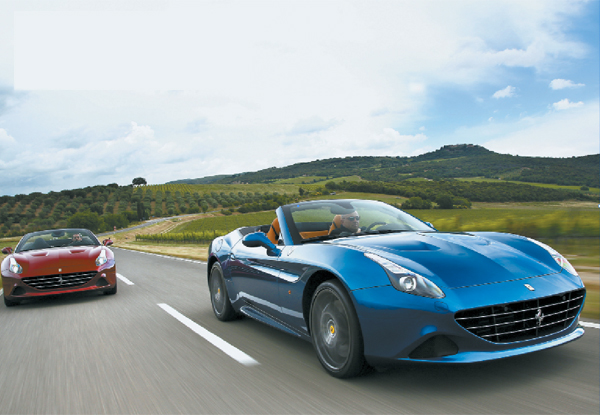 Ferrari staff in Siena, Italy, test drive the California T, the first model installed with a turbocharged engine since 1987. Provided by Ferrari

SIENA, Italy - The Ferrari is a car that so many people dream of owning, especially in the movies. In the film “Scent of a Woman” (1992), the 1989 Mondial T Cabriolet is a symbol that revives the suicidal Lieutenant Colonel Frank Slade’s desire to live.

The image of Demi Moore, wearing a sexy black bikini and exiting a red Ferrari Enzo at a beach in “Charlie’s Angels 2 - Maximum Speed” (2003), is one that likely comes to mind when people picture success in life or owning a supercar. But the Ferrari is not an item that just anyone can acquire.

Fortunately, the Korea JoongAng Daily was given the opportunity to ride a Ferrari in Siena, Italy. When the refreshing smell of early summer filled the town, this reporter got the chance to test drive a California T, which is Ferrari’s newest model and the first to be implanted with a turbo engine in 27 years.

The drive was operated on a 180-kilometer (111-mile) course from La Bagnaia Resort through Pienza, Montalcino and Tuscany. A total of 16 reporters from eight Asian countries, including Japan, Singapore and Thailand, took to the California T’s wheel. The Korea JoongAng Daily was the only Korean newspaper given the opportunity to test drive the car.

Around 9 a.m., Ferrari’s staff briefly explained the car’s manual. After pushing the red start button on the steering wheel, the typical thundering sound of a Ferrari’s engine hit our ears, reminding us of the brand’s prancing horse symbol.

As soon as the automobile left the resort’s main gate, about 300 meters (984 feet) of a two-lane road stretched ahead, which was the perfect chance to feel this bad girl’s full power. After making a complete stop, I jammed the accelerator pedal to the floor. In a moment, the blue California T, which weighs 1,729 kilograms (3,811 lbs), stormed like a racing horse waiting for a gate to be opened, exhaling with a rough breath.

The California T’s new turbocharged V8 engine - the first turbo engine planted in a Ferrari car since the 1987 F40 - was what caused the thrill. The engine also has an improved fuel efficiency to the tune of approximately 15 percent more than the previous California, despite punching out an extra 70 cv and 49 percent higher torque in seventh gear, meaning that Ferrari has managed to boost both the performance and fuel efficiency. 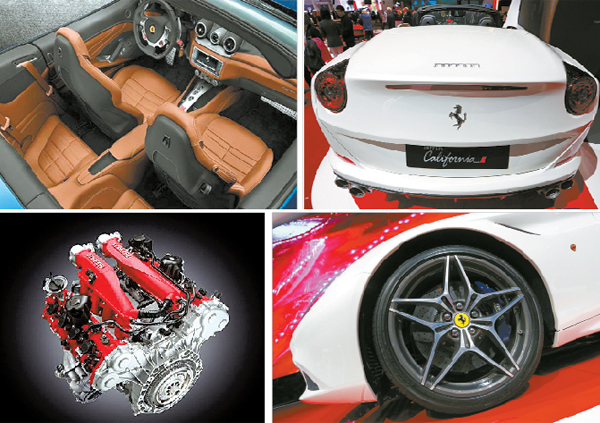 From left: California T’s new direct injection 3,855 cc V8 Turbo engine; Nineteen-inch starburst-design alloy wheels are installed on the model; The rear seats accommodate up to four children, or alternatively, two adults on short trips; and Ferrari’s classic round rear lights frame the trailing edge of the boot that acts as a spoiler and is designed to minimize the visual height of the tail.

The core of this turbocharged engine is its Variable Boost Management, which Ferrari introduced as a new control system to integrate with the ECU, which adjusts torque delivery to suit the gear that is used.

As the car goes up through the gears, the amount of torque delivered by the engine also increases, allowing Ferrari to adopt longer gear ratios in the higher gears, which contributes to cutting fuel consumption and emissions without affecting the pleasure of driving.

“We can’t count how many people worked on it, but our top engineers put their best effort in to develop this new engine for the past four years at Maranello,” Stefano Varisco, who is responsible for the Vehicle Dynamics Control System, told the Korea JoongAng Daily. “The engine is our best and is high-end technology itself.”

The improvements are proven by the numbers. Maximum horsepower increased by 70, and the torque improved by 47 percent. The new direct injection 3,855 cc V8 turbo punches out a maximum of 560 horsepower, yielding a specific power output of 145 cv/l, the highest in its category, in addition to a maximum torque of 755 Nm in seventh gear. The maximum speed of the California T is 315 kilometers per hour.

But the downsized turbo engine will not be adopted by other upper-level Ferrari models. “We are not considering planting the turbo technology into other Ferrari models,” the company’s powertrain chief Vittorio Dini said. “They will maintain their Ferrari DNA that focuses on high performance.”

The driving continued after lunch at Pienza. While endlessly winding up and down roads within Tuscany, a beautiful region, I saw brown and red-roofed villas, vineyards and olive trees that create this picture-perfect landscape.

There are differences in the courses you can take, but the car didn’t give me any problems on the curved roads, even at high speeds of more than 80 kilometers per hour, thanks to its new springs and steering box.

For better handling and to combat roll and pitch, springs that are 11 percent stiffer were adopted. The car also boasts a steering box with a rack that is 10 percent quicker, which makes it more direct and reduces steering wheel activity over twisty routes.

To this Ferrari rookie’s shame, I couldn’t feel the prancing horse 100 percent because I obviously needed more time to learn how to find the right moment to use the brakes and control the wheel, especially when the car goes from a straight course to a curve while maintaining high speed.

People might experience themselves changing the car’s sports mode to comfort after experiencing a lane departure that leaves beads of sweat on their forehead, just like I did.

But this isn’t something to get scared about, considering the test drive was all about finding the car’s best performance and that 70 percent of first-time Ferrari buyers purchase the California model.

“I doubted whether this turbocharged Ferrari really did improve efficiency while keeping the Ferrari’s DNA, but it looks like they did it,” Tatsuya Kushima, a famous car columnist from Japan who participated in the test drive, said. “I can’t find a rival for the California T at the same level.”