The vice of nationalism

The vice of nationalism 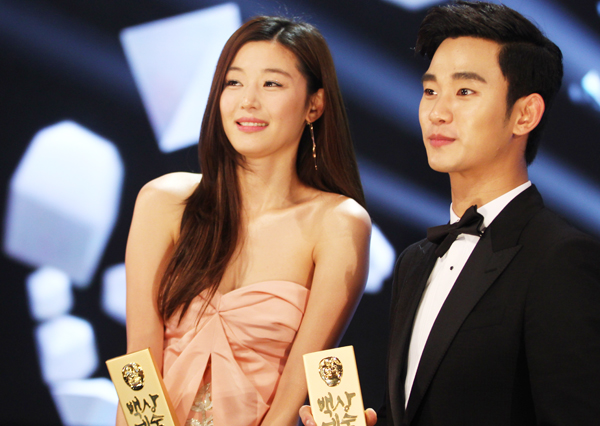 Famous Korean actress Jun Ji-hyun and actor Kim Soo-hyun receive the Grand Prize and Popularity Award, respectively, for their roles in the drama “My Love from the Star” in the TV category of the 50th Baeksang Arts Awards last May. [JoongAng Ilbo]

A strange species named marimo can be found in Akan Lake, Hokkaido, Japan. The rare, green algae is in the shape of a ball. Various sizes can be viewed at an exhibition hall in Hokkaido, and visitors can buy small marimo in glass jars as a souvenir. According to a local myth, it takes about 200 years for a marimo to grow as big as a baseball.

I adopted two marimo balls. It was soothing to gaze at the marimo, but I noticed that one of the balls kept floating to the surface. It is not a good sign for an underwater creature to rise. It would go down if I took it out and pet it gently whenever I changed the water. Then it stopped sinking and stayed afloat.

It occurred to me that the marimo had grown quite a bit. The bottom of the glass jar was too narrow for both of them. I set up separate jars for each one, and after one night, the marimo that had kept floating settled happily on the bottom.

Coexistence is a challenge. Trees in a thick forest skillfully keep a certain distance from neighboring trees in order to grow and survive. They make sure to leave even the narrowest space and to never overlap.

It is best not to overlap between countries in order to maintain peace. However, in the early 21st century, the international community of East Asia is overlapping, creating serious skepticism of mutual coexistence. The spatial overlapping in the East Sea and South China Sea and the temporal overlapping of the colonialism and imperialism of the early 20th century constantly creates discord.

Recently, top Korean stars Kim Soo-hyun and Jun Ji-hyeon, who have become very popular in China, were involved in a scandal over a mineral water commercial. They are in an awkward position. The product advertises that its water originates from Mount Changbai, the Chinese name for Mount Baekdu. It is a reality that more than half of Mount Baekdu lies in Chinese territory, and the Chinese call it Mount Changbai. While the name Takeshima is appalling to most Koreans, it is not quite the same for Koreans to feel offended by Mount Changbai.

Japan’s original sin in the 20th century is clearly the cause of major discord in the East Asian region, so such situations are simpler to understand. Aside from cases that involve state power, such as Prime Minister Abe’s attempt to verify the Kono Statement, the excessive nationalism commonly displayed among the people of the three Northeast Asian countries is worrisome.

A Japanese visitor vandalized the comfort woman statue in Seoul, and anti-Korean protests are held in Tokyo. A few years ago, worldwide protests opposing China’s hosting of the Beijing Olympics led to some protests in Seoul, and in response, angry Chinese people went around downtown Seoul with Chinese flags.

Just as the mineral water controversy has shown, Korea’s nationalism is quite excessive. In 2011, a Korean football player mimicked a monkey after scoring a goal in a match against Japan, which was obviously distasteful.

Europeans seem to have learned to live together after experiencing terrifying bloodbaths, but East Asia has a long way to go. A Japanese intellectual was harshly criticized when he said about Dokdo, “Why don’t we just give the island to Korea?”

While both the right and left are forced to pose as nationalists, let’s hope for a more sophisticated and wise attitude in all three countries.

Humanity in the 20th century has already experienced the vice of nationalism. In order not to become rats that fail to learn from history, we need to nurture proper citizenship and prevent excessive nationalism.