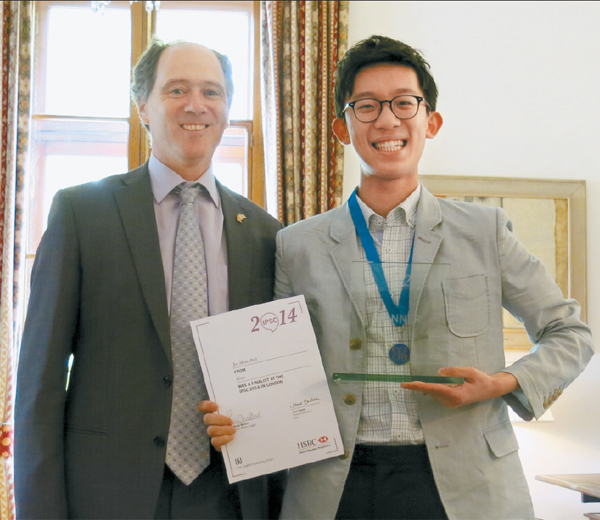 On May 23, Korean high school student Park Jae-hyun emerged as the winner of this year’s 33rd International Public Speaking Competition (IPSC) in London with his speech “Dare to Dream.”

In the competition, hosted by the London-based English-Speaking Union (ESU), student representatives from participating nations had the opportunity to showcase their public-speaking abilities on an international stage.

As the victor, Park, who attends the Korea International School, has achieved something that those who pursue a career in public speaking can only dream about. But when the high school junior sat down with the Korea JoongAng Daily on Sunday, June 1, to share his experience competing in the event, he said the contest was merely a stepping stone in the long term.

“Some say I have reached the apex of my public-speaking career and that I can’t go any higher than that because I’m a world champion,” Park said. “Then I tell them that this is not the end, only the beginning of a long journey ahead.” 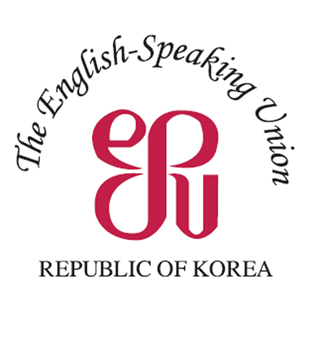 Q. Why did you decide to participate in the ESU competition?

A. The ESU competition was neither forced upon me by my “tiger mom” nor was it forced upon me by my teachers. I managed to find the English-Speaking Union because I had a deep interest in public speaking and I wanted to see what kinds of opportunities were available to me. There was no external pressure; it was all on my own.

When did you begin preparing?

I participated in the winter ESU tournament in 2012 and it took me about four to five weeks to draft my persuasive speech, then I attended the ESU national round and happened to win first place in the high school division. Afterward, it took another year for me to qualify for the national representative selection round, and in that round, there were two high school division winners - one from winter 2012 and one from summer 2013. We competed against each other to determine who would represent Korea in the IPSC, and that’s how I qualified.

Why do you think you won the competition - the entire tournament and the national representative match?

First, I already had extensive experience in public speaking and debate. So I had a pretty solid foundation to begin with, which kind of propelled me forward. Besides that, in my speech, they actually say that good public speeches should inform, persuade, inspire and also entertain, and I could do all four. I think that’s the main reason my speech was able to appeal to the audience.

What was the topic?

My topic for the IPSC tournament was “Dare to Dream.” The overarching theme of the 2014 IPSC tournament was, “Imagination is more important than knowledge,” which is a famous quote from Albert Einstein. Each participant was supposed to interpret the theme in their own way and come up with a unique and distinctive persuasive speech. And my speech, “Dare to Dream,” touched on how people can use imagination to fight against injustice and dictatorship. That was sort of my overall thesis.

What is your most memorable experience participating in the tournament?

I can tell you some of the highlights from the trip to the 2014 IPSC in London. And I, personally, am a drama geek. There is something about acting that really empowers me and really inspires me. Visiting Shakespeare’s Globe Theatre in London was a fascinating experience for me - being able to learn tips and strategies from some of the best actors and also conduct group activities. That was one of the highlights of the trip.

Another highlight was the workshop, and I think the workshop was a lot of fun. That was an integral part of the experience because we got to learn everything from forming an argument to appealing to the audience. So we learned a wide variety of strategies and tips regarding public speaking. I thought it was a very rewarding experience for all participants.

I think a very important part of the experience is “networking,” getting to know prodigies from all different nations. So you can see there is a wealth of talent, some of the best and brightest minds from around the globe gather together at the same place in London. So it wasn’t just forming shallow, one-time connections, but more of forging genuine friendships that last a long time. I even keep in contact with many of the participants now. It was a great experience.

Also, we had so much fun together and we got to engage in conversations that were very meaningful. So I learned so many things, from, say, Argentine history to Zimbabwean politics. We had these conversations over the dinner table, and it was a very fun experience.

How do you see your future?

I hope to pursue a public-speaking career in college. My other interests include public policy-making. I actually founded a youth organization. It is a youth policy forum that submits policy to local agencies. Whenever there is a major societal issue, then we try to submit a policy from a youth perspective. I’m also interested in international relations. I really want to work in the global platform of the United Nations someday. UN Secretary General Ban Ki-moon - as I’m sure he is for many people - has been a role model and inspiration to me for the past seven years.

As a public speaker, are you also studying extra-curricular subjects?

That is a very important point. In the IPSC tournament, there are preliminaries and grand finals where we deliver prepared speeches for five minutes, but there was also a three-minute impromptu speech with a 15-minute preparation. There were three papers and we were supposed to choose one of the topics, interpret the theme and make a speech on the spot by improvising it. So impromptu speeches require you to really have a wide understanding of different issues because, for example, if you are only an expert in music, how can you speak for three minutes and deliver an awesome speech on politics or history?

I think good public speakers need to accustom themselves to a wide variety of issues, from culture, history and politics to pretty much everything else.

How are your parents thinking about your enthusiasm in public speaking?

My parents are actually very liberal, they are not tiger parents. I can guarantee that they are some of the chillest people I know, and I’m really thankful for that. And I think that the liberal mind-set has allowed me to really explore the things I want. I know some parents who tell their children to stay away from public speaking and debate because they need to focus on academics and exams.

But my parents said, “If that’s your main interest, I will support you financially and I will encourage you.” For instance, my father took me all the way to London and took off from work for one week. He accompanied me to London for the entire week, and he was my main supporter. He was like my driver and manager. So I’m really heavily indebted to my parents. They are very supportive of my interests.

What would you say to future participants in the ESU tournament?

First of all, many people lack confidence in public speaking, especially Koreans who haven’t been really been exposed to an English-speaking environment. I think confidence is the key because the audience is not there to criticize you or check every single error you make. They are there to support and encourage you. Don’t be frightened in front of a large crowd. Instead, see the audience, break through that barrier, interact with the audience and simply have fun. In psychology, nervousness and excitement are equivalent. So why not translate that tinge of nervousness into a feeling of excitement? If the speaker is exited and enthusiastic about the given topic, the audience will also feel enthusiastic. Building that connection with the audience is very important.

Another piece of advice is that Korean students tend to be fiercely competitive, but I think friendly competition is enough and nothing more. ... Public speaking is such an invaluable part of life - at work, in classroom settings. The podium is pretty much everywhere. I feel like that’s why it’s important to make yourself accustomed to public speaking. As I said before, I think good speeches do four things: inform, persuade, entertain and inspire. If you manage to include all four elements, then bravo - your speech will be great. Keep trying, never stop acting and never stop dreaming, and then your dreams will come.