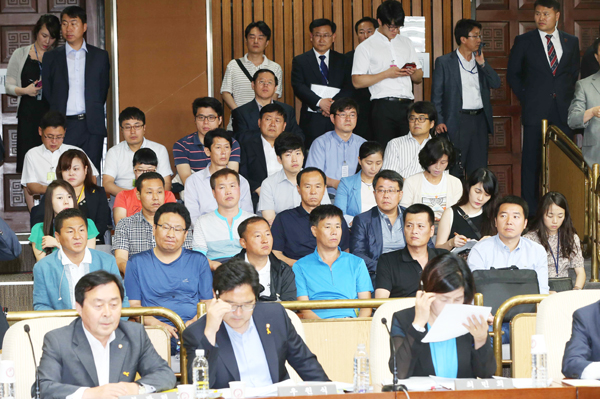 Parents of sunken Sewol ferry victims sit in the gallery at the National Assembly yesterday to watch a parliamentary hearing on the disaster. By Oh Jong-taek

The special parliamentary committee consists of lawmakers from both the ruling and opposition parties, who have been separately probing the April 16 tragedy since its launch on June 2.

Members of the committee questioned the lack of experience shown by the Central Disaster Relief Headquarters, which comes under the Security and Public Administration Ministry, along with the Navy’s unreliable rescue operation support and the substandard documents submitted by related government institutions.

“The accident was the result of both the Ministry of Security and Public Administration and the Korea Coast Guard’s worse than amateur initial handling that helplessly passed the golden time of the rescue operation,” said Kweon Seong-dong, a lawmaker with the ruling Saenuri Party.

Representative Kyung Dae-soo, also of Saenuri, pointed out that the central headquarters did not involve any rescue or safety control experts and that the agency could not even count the exact number of ferry passengers or those who were rescued.

Kang Byung-kyu, the minister of safety and public administration, responded that only the Korea Coast Guard is able to verify the exact number of survivors in maritime accidents, which is what made it difficult for the government to cross-check the figures.

Representative Kim Hyun, of the main opposition New Politics Alliance for Democracy, noted that the government willfully neglected its duty because it failed to save lives that could have been saved.

“It turned out that only 40 sets of scuba gear suits for only 50 divers were deployed for the rescue operation on the day of the accident,” Kim said.

A group representing the family members of the disaster victims monitored day one of the parliamentary committee, but the group’s leaders said that the committee failed to meet their expectations.

“We will bring up the issue if the parliamentary investigation isn’t conducted sufficiently,” said one of the executives of the group.