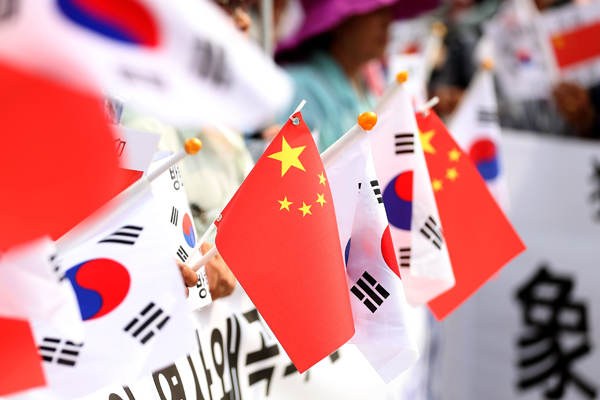 Members of conservative civic groups pair Chinese and Korean national flags yesterday near the Chinese Embassy in Myeong-dong, central Seoul, to express a warm welcome to Chinese President Xi Jinping before he arrives on a state visit to Korea today. [NEWS1]

Over a two-day visit, he will meet President Park Geun-hye at a summit and at banquets to discuss measures to improve peace and stability on the Korean Peninsula, including the North Korean nuclear issue and expanding cooperation in diplomacy, business and culture.

“It is hoped that Xi Jinping’s visit to Korea will provide momentum for both countries to solidify the special trust and ties built so far between their leaders and to bring the ‘strategic cooperative partnership’ to a more mature level,” said Ju Chul-ki, senior presidential secretary for foreign affairs and national secretary, in a briefing at the Blue House.

According to diplomatic sources here, Park and Xi are highly likely to upgrade their countries’ bilateral relations to a comprehensive strategic cooperative partnership during Xi’s trip.

Xi is breaking with tradition by coming to Seoul before he visits Pyongyang - a sign to North Korea to refrain from further provocations.

Xi has not even met North Korean leader Kim Jong-un, although this is his fifth meeting with Park since both took office early last year.

Xi’s predecessor Hu Jintao visited Pyongyang in 2005 and went to Seoul later that year. Hu’s predecessor Jiang Zemin went to the North in 1990 and then to the South five years later.

A very tight schedule awaits Xi in Seoul. The two leaders will have a summit for more than one and a half hours this afternoon. They are expected to issue a joint statement, possibly about helping to resolve the North Korean nuclear issue through peaceful negotiations, and sign some 10 memoranda of understanding (MoUs) in the trade, finance, consular and environmental fields.

Although Seoul has expressed a wish for China to deliver a stronger message about Pyongyang’s denuclearization, analysts say the chance appears slim given North Korea is China’s longtime ally and a strategic asset. It also remains to be seen whether Park and Xi can narrow gaps on ways to resume the six-party talks.

Substantial progress in free trade agreement negotiations that had an 11th round of talks in May is expected during the summit. Xi expressed hopes earlier that the talks be finalized by the end of this year.

Financial authorities from both countries are also known to be in the final stages of allowing direct trading between the won and the yuan. Making the yuan directly exchangeable for the won will hugely benefit exporters, who will be able to slash currency conversion costs and risks.

Major attention will also be paid on whether Xi will explicitly mention Japan’s latest move to become stronger militarily and the tension between President Park and Japanese Prime Minister Shinzo Abe over historical issues.

The summit will be followed by a live televised press conference. A banquet is also scheduled, which will be attended by Xi’s wife Peng Liyuan.

The second day will begin with Xi’s visit to the National Assembly, where he is slated to meet with its speaker, Chung Ui-hwa. The Chinese president will then travel to Seoul National University to give a 45-minute lecture, which will be followed by a special luncheon prepared for Xi and his wife outside the Blue House.

After a conversation with Prime Minister Chung Hong-won, Xi will take part in a Korea-China business and trade forum to be attended by an unprecedented number of leading Chinese businessmen, including Tian Guoli, chairman of the Bank of China; Jack Ma, CEO of e-commerce giant Alibaba; Robin Li, CEO of Nasdaq-listed online search company Baidu; Ren Zhengfei, chairman of Huawei, a smartphone and telecom equipment maker; and Wang Xiaochu, chairman of China Telecom, one of the country’s top three mobile operators.