RSM takes on imports with its diesel sedan

RSM takes on imports with its diesel sedan 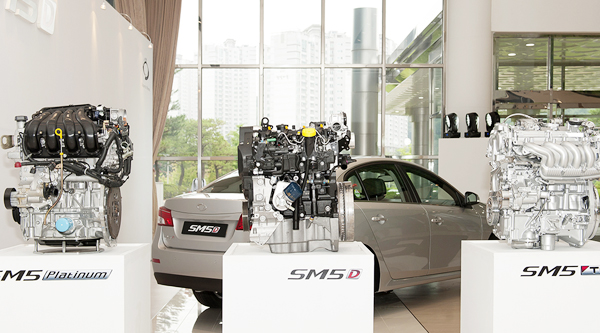 Engines for Renault Samsung Motors’ SM5 are displayed at the company’s Giheung Technical Center in Yongin, Gyeonggi, yesterday. Provided by the company

Renault Samsung Motors is following other Korean automakers gearing up to compete with imported diesel sedans with the launch of the SM5 D yesterday.

The Korean unit of French automaker Renault said that its SM5 D will be sold at a price of 25.8 million won ($25,500), with the highest trim model going for 26.95 million won. The company has already received 1,500 contracts since it started accepting pre-orders on June 23.

According to data from the Korea Automobile Importers and Distributors Association, 68.5 percent of imports sold in the first five months of this year were diesels.

To defend the home turf, Hyundai Motor released a diesel version of its Grandeur (sold as the Azera overseas) to compete against German premium diesel sedans, while GM Korea launched the Malibu Diesel, which is equipped with a 2.0-liter turbo diesel engine manufactured in Kaiserslautern, Germany, in March.

RSM said its SM5 D will be different from its competitors’ models as it is a “segment breaker,” offering a downsized engine to attract customers who want to experience a kind of European pragmatic style.

“Renault is one of the automakers that has advance technology in diesels and I have wondered why Renault Samsung didn’t go for diesels,” said RSM Vice President Park Dong-hoon in a press briefing at the company’s Giheung Technical Center in Yongin, Gyeonggi. “The SM5 Diesel will be the signal that the company is making a new space in the industry through downsizing and segment breaking.”

The automaker said that the “D” stands for “Drive More,” as the car’s fuel efficiency is 16.5 kilometers per liter (38.8 miles per gallon). “D” also stands for “Demonstrated Techno” and “Differentiated Diesel.”

Park said that the company aims to sell 800 to 1,000 units of the SM5 D monthly and will consider expanding its diesel lineup to SM7 or SM5 sedans after watching how the midsize diesel performs.