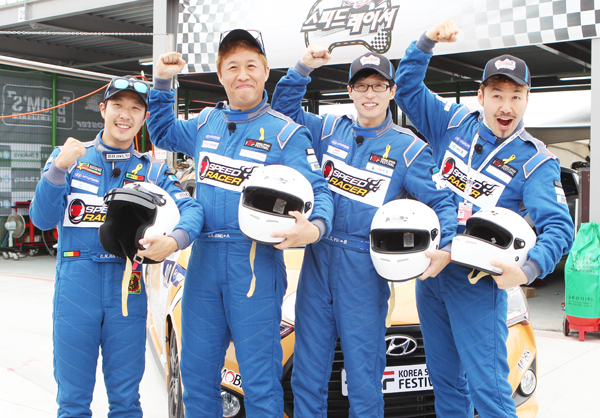 Entertainer Yoo Jae-seok reportedly crashed into a guard rail yesterday afternoon while competing alongside other professional roadsters in the final round of the “Veloster Turbo Masters,” part of the challenge he accepted in the entertainment program “Infinite Challenge.”

Although the front bumper had a great deal of damage, Yoo managed to walk away from the scene. He left the circuit in another car soon after the accident but did not finish the race.

Yoo was involved in another accident last week while practicing for the final race. He was forced to stop in the middle of the preliminary round on Saturday due to technical malfunctions.

Another contestant Jung Jun-ha, also failed to complete the race after his car abruptly stopped after 12 laps.

Actor Haha was also unable to finish his race in the final round of the amateur “Avente Challenge Race,” due to tire malfunctioning on his vehicle.

On the MBC show, its members take on sports challenges or missions dealt out by the production team to live up to the program’s title. In the current challenge, participants were to compete in races in the Korea Speed Festival, which runs until November.

Footage from the races will be broadcast on Saturday.