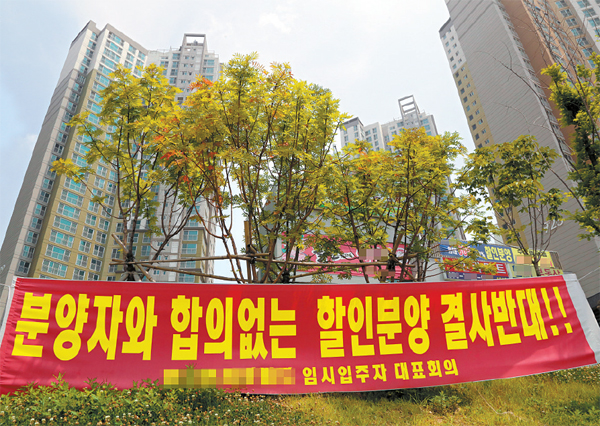 A banner at an Incheon residential complex, reads: “We desperately oppose discounting apartments without residents’ consent.”More than 1,000 apartments there remained vacant before prices were reduced 22 to 30 percent. By Kim Hyung-soo

On June 17, at the back gate of a residential complex in Jung District, Incheon, some 30 tenants were protesting against the construction company for discounting unsold apartments.

The leader of the group, a 55-year-old man with two lighters in hand, suddenly poured gasoline over his body in a fit of anger.

Police were able to wrest away one lighter from him, but in the tussle he took the second lighter and lit himself ablaze.

“We admit that we made a poor investment, but that tragic accident happened for a reason,” said a 54-year-old protester, who identified herself as Lee. “I used up all my savings to buy that apartment for my later years, but I’ve lost about 100 million won [$98,800]. We at least had to do something.”

The protest began on May 7, after the construction company that built the complex reduced prices on the vacant apartments by 30 percent. The subsequent rally on June 17 was intended to prevent those who bought the apartments on the cheap from moving into the complex.

The apartment complex, comprised mostly of large apartments, began to accept residents from 2011, but more than 1,000 apartments out of 1,365 remained unsold before prices were readjusted.

The situation is just one of a number of conflicts nationwide that have originated and grown increasingly more intense over apartment prices. Such resentments have even ruined some residential communities, while other tenants have filed lawsuits against their construction companies.

According to the Ministry of Land, Infrastructure and Transport, as of April, the number of unsold apartments countrywide was 45,573. The situation is most serious in new towns around Seoul. In Hangang New Town in Gimpo, Gyeonggi, 10 out of 16 apartment complexes have sold some of their vacant residences at discounted prices.

Nine out of 23 complexes in Unjeong New Town of Paju, Gyeonggi, had flats at reduced rates, as did one of eight complexes on Yeongjong Island, Incheon.

“Including indirect sales at discounted prices, you can say about half of newly built apartments are being sold at lower prices,” said a real estate agent in Hangang New Town in Gimpo. The construction industry estimates that more than 100 lawsuits have been filed against construction companies in the last five years because of discounted apartments.

Mrs. Kim, a 44-year-old woman living at an apartment in Gimpo, Gyeonggi, said she regrets moving into her apartment every time she runs into her neighbors in the elevator and is ignored. When the developer decided to sell remaining apartments at lower prices, residents of the complex were divided into two groups who were for or against the idea.

“My home has become a nightmare,” Kim said. “The atmosphere here is so intimidating that they sometimes tell me I’m crazy when I protest against the discounted prices for unsold apartments.”

“The online community website, where residents are supposed to share information with one another, has been abandoned because there was so much fighting,” she added.

Those who bought apartments at lower prices also complain that they are being condemned even though they’ve legally paid the bill.

“They can’t blame us for downward pricing,” said a woman who bought an apartment in Goyang, Gyeonggi, for about 100 million won less than residents who moved in earlier. “I feel regretful and uncomfortable because [my neighbors and I] get upset every time we talk about it.”

The construction companies, meanwhile, remain on the defense, arguing that they would go bankrupt if they kept the remaining apartments unsold.

The apartment complex in Goyang even went out of electricity for a week in January because its bankrupt company hadn’t paid its electricity bill - which totalled 200 million won - since October.

Still, housing experts say that more should be done to take the pressure off new residents.

“Just like new residents don’t pay extra even though prices go up, similarly it is legally difficult for those who bought apartments earlier [at higher prices] to make an issue out of it,” said Kim Tae-seong, an official from the Korea Housing Association.

Park Cheol-su, an architecture professor at the University of Seoul, added that there should be other solutions available.

“To support private constructors with unsold apartments, public authorities would do well to consider certain interventions,” he said, “like compensating [residents for the] difference in price.”