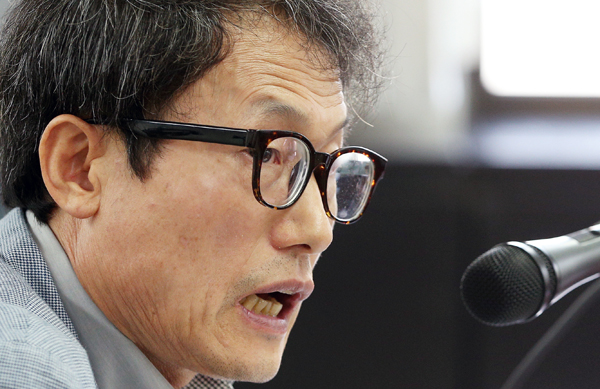 Cho Hee-yeon, a liberal superintendent, unveiled a largely scaled-down version of his pledges. When it comes to expanding schools that promote discussion and character nurturing, he said 10 schools will be newly designated as “revolutionary schools,” which would have smaller class sizes and promote an array of extracurricular and creative activities.

His cautious approach appears to stem from critical voices that argue that those schools would bring about changes too radical for the current education system. Supporters, however, counter that such schools are necessary to give students alternative perspectives, a break from rote memorization.

Cho also pledged to abolish or downsize expensive self-governing high schools and foreign-language high schools, and took a swipe at the administration of President Park Geun-hye for its treatment of the Korea Teachers and Education Workers’ Union (KTU), while distancing himself from the beleaguered group. The union was stripped of its legal status following a ruling by the Seoul Administrative Court last month.

“I don’t totally agree with the agendas that the teachers’ union advocates,” Cho said. “Still, it’s wrong to target and demonize a certain group just because we don’t agree with them.”

He also voiced concerns for the Ministry of Education, which vowed to punish KTU members for leaving their schools early to attend group demonstrations. “I don’t think that cutting school hours short to join a demonstration is ideal behavior,” he continued, “but if the government and education minister believe the teachers are violating the law, it’s too restrictive.”

After about a thousand teachers left their schools early to join a demonstration on June 27, the authorities demanded a list of rally participants from local education offices. KTU members argued that they gave advance notice and adjusted class hours in order to execute their democratic rights. The ministry countered that the teachers went ahead with their protest despite their school principals rejecting their written requests to leave early. In disciplining the teachers, the ministry and superintendents will likely butt heads.

Thirteen of the 17 newly elected superintendents are liberal.