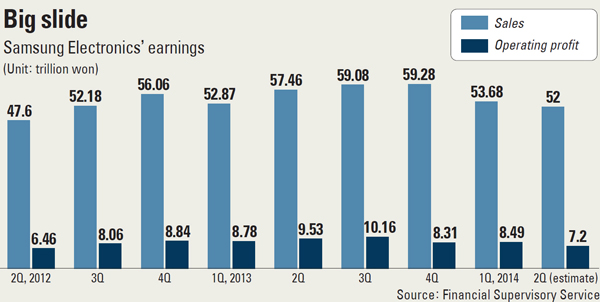 Samsung Electronics’ quarterly operating profit fell by nearly 25 percent from a year earlier, the tech company said in an earnings guidance yesterday, adding to uncertainty surrounding the tech giant, whose chairman has been hospitalized for almost two months after suffering a heart attack.

The company’s estimate for operating profit in the three months that ended in June is 7.2 trillion won ($7.1 billion), a 24.4 percent drop from 9.53 trillion won in the second quarter of 2013. It is a 15 percent slide compared with the first quarter.

This is the first time that the world’s largest vendor of smartphones, memory chips and TVs has projected an operating profit of less than 8 trillion won since it earned 6.46 trillion won in the third quarter of 2012.

It also marks the second consecutive quarter of declining sales. 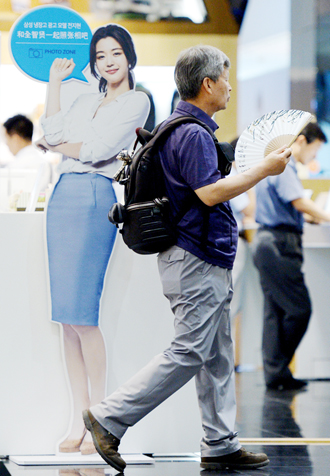 Customers shop in a Samsung Electronics store at its headquarters in Gangnam, southern Seoul. [NEWS1]

Sales of the country’s largest exporter were estimated at 52 trillion won, down 9.5 percent from the same quarter a year earlier and a 3.13 percent fall from the previous quarter.

The company does not provide a breakdown of each business segment in earnings guidances that precede a confirmed earnings report by several weeks. Some analysts estimated the company’s information and mobile communications division, which sells mobile phones, had less than 5 trillion won in operating profit in the second quarter, compared with more than 6 trillion won in previous quarters.

Samsung cited the strong won and a seasonal slowdown in demand for electronic products as some of the “temporary” negative factors affecting its second-quarter performance.

“Samsung also saw an increase in inventory due to price competition and a weaker demand for 3G products ahead of the expected growth of 4G LTE products in the Chinese market,” the company said in a regulatory filing.

Doh Hyun-woo, an analyst at Mirae Asset Securities, said that Samsung met a market consensus of 20 million shipment of the Galaxy S5 in the second quarter. But he estimated shipments of all Samsung smartphones in the quarter were only 74 million, down 18 percent from the previous quarter.

Aggressive marketing costs to clear out inventories of smartphones and tablet PCs contributed to the operating profit decline, the company said.

Samsung is scheduled to release the new Galaxy Note 4 phablet in the fall.

Some analysts painted a longer-term problem of the company struggling to position itself in a changing smartphone market in which Chinese companies are eating away at its market share.

Lee Seung-woo, a senior researcher at IBK Investment and Securities, said Samsung continues to lose ground to Apple and fast-growing Chinese companies, although he was not specific.

An earlier survey by Strategic Analytics showed Samsung’s share in the global smartphone market was 31.2 percent in the first quarter, down 1.2 percent from the same quarter of 2013, the first time it fell in four years. Samsung will continue to be squeezed by Apple and Chinese companies and will have to think a lot about its future, Lee said.

In April, Samsung introduced the Galaxy S5, a mild improvement on the Galaxy S4, at a lower price than its previous introductions, apparently to respond to the market’s tilting toward lower-end products. Song Myung-sup at Hi Investment and Securities said was not enough, adding the company will have to come up with more aggressive strategies to deal with Chinese competition.

Meanwhile, Bloomberg estimated that Samsung’s consumer electronics division, which sells TVs and home appliances, recorded 490 billion won in operating profit in the second quarter, up from 430 billion won a year earlier, thanks in part to demand for TVs ahead of the ongoing FIFA World Cup in Brazil.