Friends turn to foes in battle over Dongjak B race

Friends turn to foes in battle over Dongjak B race 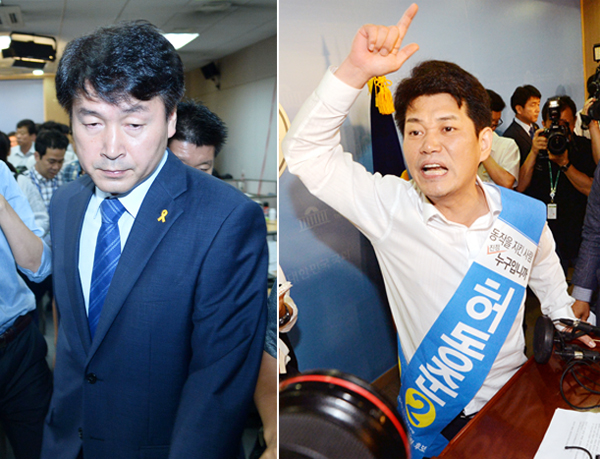 Ki Dong-min, left, abruptly leaves in the middle of the press conference yesterday at the National Assembly as Heo Dong-jun, right, vehemently complains of the NPAD leadership’s decision to give a party nomination to Ki. [NEWSIS]

Ki Dong-min and Heo Dong-jun, two liberal politicians, have been friends for 20 years. As student activists, they fought together for democracy in Korea.

Yesterday they were fighting each other with fists at the National Assembly over a nomination in the July 30 by-election.

Ki, a former deputy mayor for political affairs at the Seoul city government, was telling reporters at a briefing at the National Assembly that he will accept the New Politics Alliance for Democracy’s surprise nomination of him to run for the Assembly seat in Dongjak B District, in western Seoul.

It was a nomination sought by several people including his old friend Heo, who has unsuccessfully applied to the party to nominate him for 14 years.

“I will accept the party’s decision asking me to run in the Dongjak B District for the by-elections,” Ki told reporters. “In terms of Heo Dong-jun, who has been a friend of mine for 20 years …”

At that point, a group of party members stormed the briefing room, including Heo, who shouted, “No! This can’t be!”

Heo jumped onto the stage holding Ki and tried to beat him with his fists. National Assembly security guards scuffled with Heo and his supporters, trying to hustle them out of the room.

The security guards dragged Heo to a corner of the stage. Heo read out his own statement to protest Ki’s nomination by the party leadership.

“Who brought on this immoral situation?” he said. “The fate of our democratization fighters depends on [the by-elections]. If the NPAD pushes ahead with this decision, we will all be condemned by the people.”

Dongjak B District is the hottest National Assembly race in the by-elections because it is the only seat being contested in the capital. Many political bigwigs allegedly want to run in the race.

The NPAD co-leaders announced said they nominated Ki because he was a totally “fresh face” in the party without any factional affiliation. The ruling Saenuri Party has not announced its nomination yet.

But Heo and other hopefuls argued that the leadership was banking on the popularity of Seoul Mayor Park Won-soon to swing the vote. Park won re-election in June by a large margin against the ruling party’s high-profile nominee, Chung Mong-joon. Chung gave up his seat in Dongjak B District to run in the mayoral election.

In fact, Ki did not apply to run in the district. He applied for a seat in Gwangju, South Jeolla. But he got Dongjak B because, his rivals claim, of his closeness to Park. In contrast, Heo has lived and worked in the district for more than two decades as a leader of the party’s local committee. He has applied to be nominated to run from the district for the past 14 years, but never been chosen by the leadership.

According to NPAD members, Ki and Heo were known to be close friends for 20 years as former pro-democracy student activists in the 1990s.

After the scuffle, Ki tried to finish his statement outside the briefing room.

“He [Heo] sacrificed himself for the past 14 years working for the district,” Ki told reporters. “Although I understand his desperation, however, I have to go my own way.”

Heo told reporters later that both he and Ki were “victims” of a unilateral decision by the party leadership, which he demanded it retract.

The NPAD leadership held a meeting yesterday but did not make any decision on the nomination. A total of 31 NPAD lawmakers supporting Heo have released a joint statement calling on the leadership to scrap Ki’s nomination.