KAL rises above in safety standards

KAL rises above in safety standards 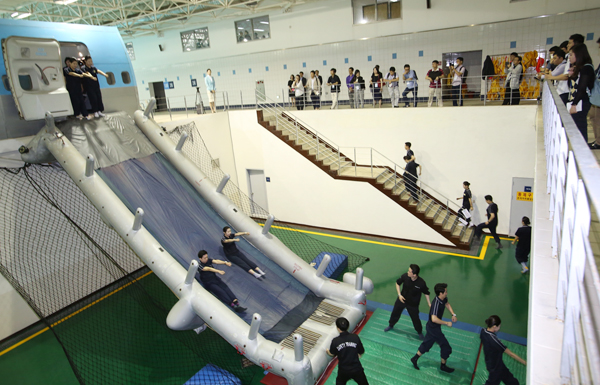 Since the Sewol ferry tragedy in April, safety has become a top priority for most companies in Korea. But for the nation’s largest air carrier Korean Air Lines (KAL), it has long been the most important value - one that the company had to learn the hard way.

The company had a dark history in the 1990s in which it suffered a series of fatal accidents. The worst was in 1997, when 229 passengers died in a crash in Guam. Even after the Guam accident, several more fatal wrecks occurred up until 1999.

But since then, KAL has been accident free and has worked to overcome its troubled history. The recent ferry disaster was another alarm bell for the airline to check that it is doing everything right in terms of safety.

“Looking at the Sewol ferry accident as a person who is also working in the transportation industry, I see that people have done things they shouldn’t have done,” said KAL President and CEO Chi Chang-hoon during a press tour of the company’s headquarters in Seoul on July 1. “We also suffered in the 1990s, but since then, we have been trying to give our best effort to change the safety culture and mind-set of pilots.”

These days, the affiliate of Hanjin Group gives a “safety bonus” to employees when they achieve certain goals. Last year, although the company stayed in the red, KAL spent 48 billion won ($47 million) on safety bonuses, as Hanjin Group Chairman Cho Yang-ho said: “A promise is a promise.”

In fact, improving safety has helped the company financially. In 2000, KAL paid $120 million in insurance fees, but now that cost is down to $12 million due to its decades-long accident-free record, according to the CEO.

After the string of crashes in the 1990s, KAL said it received guidance from Delta Air Lines to help it rebound to its current level of success. Using Delta’s system as a benchmark, KAL opened its Operation Control Center (OCC) in 2000, making it the first among local airlines.

“In the process of setting this safety system, there was chain reaction of accidents continuously occurring in imperfect systems,” said Kim who is also a captain of KAL’s A380. “Delta suffered a series of accidents before we did in the 1990s, but they survived and that’s why we picked Delta.”

The OCC, located on the eight floor of KAL’s headquarters near Gimpo International Airport, is the heart of the company’s flight operations. At the center of a wall-sized screen, an aircraft situation display showed each KAL plane’s flying route and the aircraft around Incheon International Airport.

KAL runs 450 flights a day and about 80 are in the air at one time. About 140 employees at the OCC work in three shifts to track every flight, at every hour of the day. The flight operators help pilots make the best decision if they are put in an unexpected situation.

“The OCC provides another set of eyes, directing the flight from a different point of view,” said Park Chan-hyuk, KAL’s vice president at the scheduling department.

While flight watchers or dispatchers are in charge of safety on the ground, pilots and cabin crew must account for the safety of passengers up in the air.

KAL has had a training center for pilots and crew members next to its headquarters since 2003. The center has a large swimming pool to simulate emergency situations on rivers or the sea, a mock-up of a cabin and training rooms for fires and medical emergencies. On the day of the tour, new flight attendants receive training on how to open the doors of various aircraft.

For every KAL flight attendant, it is required training. Existing crew members must also receive training here at least once a year. Although customer service is important, KAL emphasizes to the attendants that they are responsible for safety in the cabin.

KAL said pilots require at least 1,000 hours of flying time before coming to KAL, which the company said is twice as much as other local airlines.

“Even if we recruit pilots with the requirement, we give them separate training at our own air training center in Jeju for four months,” said Kim Wan-tae, KAL’s vice president of flight training. KAL said that pilots are evaluated by an international consumer panel to prevent school or family connections from affecting the result.

On maintenance, the air carrier spends more than 1 trillion won per year and has 3,400 employees working on its aircraft at five hangars in Seoul, Incheon, Busan and Bucheon in Gyeonggi.

KAL said that its maintenance ability is proved by its on-time departure rate, which was at 98.91 percent last year - 0.95 percentage points above the industry average.

Even though KAL is safe now, the company maintains that safety isn’t something to be proud of, but instead should be constantly improved.

“Safety is an investment,” said Chi. “But even if all the processes and rules are set, after all, what’s important is whether people obey and follow those settings.”