In Korea, there’s no room at the juvenile prisons

In Korea, there’s no room at the juvenile prisons 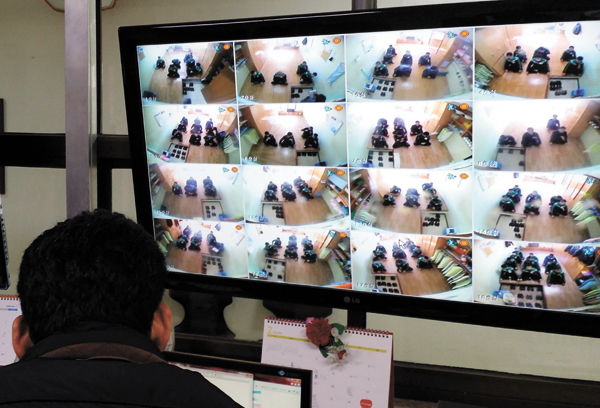 Gwangju Reformatory’s cells are supposed to accommodate eight sleeping inmates at a time, but some are more crowded. By Oh Jong-chan

A budget squeeze is turning overcrowded juvenile correctional facilities and reformatories into mere holding pens for troubled teens - and compromising their ability to help them turn their lives around.

On May 5, 2013, the teenaged inmates of Busan Reformatory were on the verge of gang warfare.

It began with a minor quarrel between the auto repair and hairdressing classes. Teachers sent the kids back to their cells, but they were so riled up they pounded the doors and steel-barred windows for half an hour. Some 400 police officers were also dispatched to the facility to prevent a riot from breaking out.

At the time of the incident, the reformatory was home to 188 juvenile offenders, exceeding its capacity of 130 by 45 percent.

“In such crowded conditions, they have become extremely sensitive,” said an official of the reformatory, “and it looks like they erupted in anger over a trivial matter.”

Correctional facilities for juvenile delinquents are overcrowded because one out of two juvenile prisons and five out of 14 reformatories shut down in 2005 and 2007. Last year, Busan Reformatory accommodated 37 percent more than its average capacity, but it can’t expand the facility because it doesn’t have the budget. Gwangju Reformatory was home to 32 percent more teens than its capacity, and Seoul had 28 percent more.

Juvenile prisons and reformatories are supposed to help teenage offenders prepare for their lives after getting out and nudge them in the right direction. The budget shortage has undermined the way they teach ethics and vocational training.

Out of 10 reformatories in Korea, Gwangju Reformatory and Busan Reformatory were designated as juvenile offender facilities that specialize in vocational training. But their training facilities are pretty ragged these days.

When 13 inmates of Gwangju Reformatory practiced car maintenance with engines in February, two of the four engines didn’t work. The two that did were also occupied by two students preparing for an upcoming competition. The other 11 kids were forced to study basic skills with the broken engines.

Other inmates studying construction were practicing how to use an excavator at a playing field. But more than 20 students were assigned to a single excavator.

“Even when we train all day long, we can practice for only 15 minutes each,” said an inmate. “And we forget what we have learned pretty fast.”

Inmates complain that the vocational training at reformatories is usually restricted to car maintenance, hairdressing and baking. Some more creative classes like photography, Korean cooking and maintaining golf equipment are provided, but inmates say they’re not enough.

“There is no way I can learn music here,” said an inmate of Gwangju Reformatory. “I am never interested in what they teach.”

“When we are assigned to cells in reformatories, we get to introduce ourselves and the crime we committed,” said an inmate of Gimcheon Correctional Institution for Boys in North Gyeongsang, a juvenile prison. “That way, we learn other kinds of crimes. The first time I came to a reformatory, it was for theft. After leaving, I committed online fraud, which I learned from cellmates. So I ended up [in this juvenile prison].”

With the crowding, reformatories are short on staff for ethics education and counseling. Teachers at the facilities say they sometimes need to work around the clock because the number of staff isn’t sufficient.

“It is true that reformatories and juvenile prisons cannot correct the juvenile offenders efficiently but only serve as confinement facilities,” said Lee Jong-hun, a professor of law at Myongji University.

“If the budget falls short, they could consider rehiring retired counselors as volunteer workers,” suggested Gang Jin-ryeong, a professor of education at Kyung Hee University.