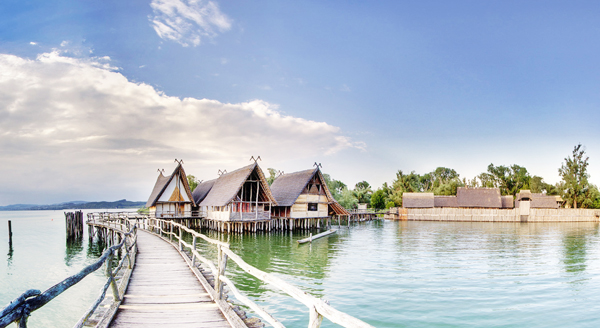 The Lake Dwelling Museum, or the Pfahlbauten Museum, on Lake Constance, Germany, is an archeological open-air museum. Provided by the museum

GERMANY - Just three weeks ago, Korea was in a celebratory mood as Namhansanseong, or Namhan Mountain Fortress, in Gyeonggi, was officially inscribed on the Unesco World Heritage List, making it the country’s 11th cultural property on the register.

However, Lee Hae-eun, the chairperson at Icomos-Korea, a nongovernmental organization composed of professionals dedicated to the conservation of the world’s historic monuments and sites, said in a recent interview with local media that people should not sit back and relax thinking that the goal has been fulfilled.

“It’s not over that we’ve inscribed [Namhansanseong] to the list. If anything, it’s only the beginning,” said Lee. “If we damage the cultural heritage that’s recognized internationally for not managing it properly, it’s a national disgrace.”

It was Lee who led the project to get Namhansanseong registered on the Unesco’s World Heritage List, which took five years in total. 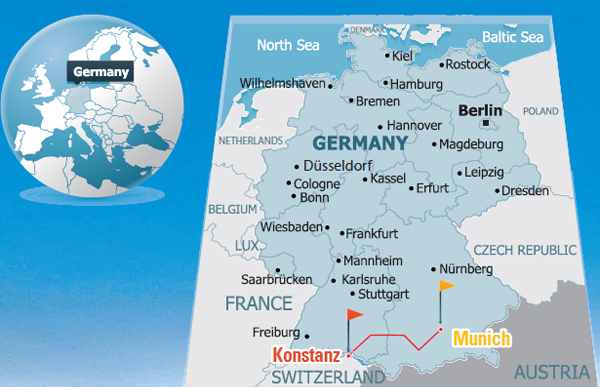 Lee said that the same theory applies to the 10 other cultural heritage structures that were registered, such as Jongmyo Shrine and Jeju Volcanic Island and Lava tubes.

Just last month, the World Heritage site Seongsan Ilchulbong in Jeju Island was embroiled in controversy as one netizen uploaded an angry post with a photograph that showed a large sign from the company Amway, which resembled the Hollywood sign, on the slopes of the peak with a Unesco sign in the foreground.

The netizen, whose nickname is Esther, wrote, “it’s nonsense that our proud cultural heritage that’s registered on the Unesco’s World Heritage List is treated by the government in such a way.”

A Chinese affiliate of U.S. company Amway sent about 17,000 of its employees to Jeju Island in early June as part of the company’s annual incentive tour.

Welcoming such large-scale tours, which boost the local economy, the Jeju government allowed the company to install large signs and hundreds of Amway flags along the walking route on condition that the employees visit Chilseongtong. The area is the island’s famous shopping district, which is often referred to as “the Myeong-dong of Jeju.”

To learn about how Germany, which has 39 cultural sites on the Unesco World Heritage List, manages and preserves some of its sites, the Korea JoongAng Daily was recently invited to the southern part of the nation to tour some of the Unesco areas there.

Germany is not just one of the top five countries, along with Italy, China, Spain and France, that have the largest number of Unesco’s prestigious world heritage sites but it’s also one of two countries in which a site was delisted as it failed to keep its “outstanding universal value as inscribed,” as Unesco expects.

In 2009, Germany’s Dresden Elbe Valley lost its status as a four-lane bridge was constructed over the River Elbe in order to resolve traffic congestion. It’s the second heritage site ever in history to be delisted by Unesco after Oman’s Arabian Oryx Sanctuary in 2007 was stripped of its title for a lack of Oryx.

The number of tourists visiting a site increases when it receives a Unesco title, which serves not only as a vital marketing tool but also a major tourism draw.

According to the World Bank’s research into six countries, including England, China, Bolivia and Morocco, it found out that after getting registered on the Unesco World Heritage List, a specific area saw a 0.5 to 5 percent increase in its number of annual visitors. 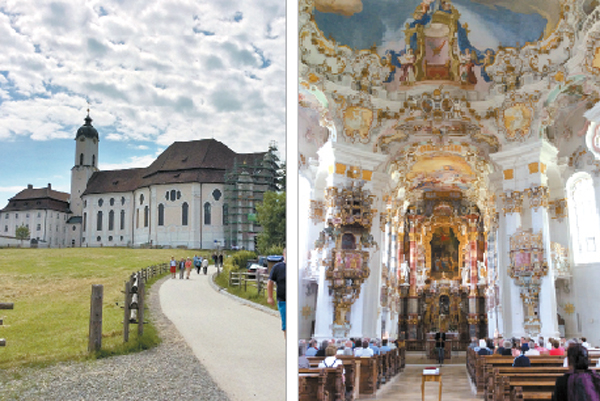 The Pilgrimage Church of Wies in Bavaria, Germany, is an oval rococo church that was inscribed in the Unesco World Heritage List in 1983. Left is the exterior of the church and right is the inside. By Yim Seung-hye

Prehistoric Pile dwellings around the Alps are a series of prehistoric pile-dwellings dating from 4000 B.C. to the end of the Bronze Age around 850 B.C. They are located in Germany, Switzerland, Austria, France, Italy and Slovenia.

Around the Alps, 111 pile-dwelling sites were nominated by Unesco, whereas nine can be found in regions around the Lake Constance, which is also known as Bodensee, at the northern foot of the Alps.

However, unlike ordinary world heritage sites, these pile dwellings are underwater.

So what’s the point of them being on the Unesco World Heritage List?

Archeologists at research centers and museums with knowledge of the pile dwellings say it’s certainly not to turn the area into a tourist hotspot.

“You can’t see anything,” said Sabine Hagmann, an archeologist at the Information Center Pfahlbauten Baden-Wurttemberg, a research body where they analyze works based on the Constitution of Unesco, the management plan for the World Heritage application, and the conservation law of the State of Baden-Wurttemberg.

“But it’s important to have the Unesco title as it helps within our government and within our organizations to get the money we need to keep the sites while giving international scope and generate interests.”

As the actual sites are not visible, the Lake Dwelling Museum plays a big part in accommodating visitors. The museum, which opened in 1922, established exact replicas of the pile dwellings so that visitors can take a close look at the settlements of some thousands of years ago.

Since the Unesco listing, the museum has seen a rise in the number of international visitors, according to Gunter Schobel, its director.

In an effort to draw public attention, the museum held a special experiment alongside a German television channel by inviting two families with children to experience living in one of the stilt houses, just like dwellers did in the Stone Age.

More than 200 families applied for the two-month experience, but just two clans - seven adults and six children - were chosen.

“They caught fish in the lake for food using Stone Age instruments, lived without electricity and wore clothes of that time,” said Schobel.

“In the earlier days of the experiment, it was really difficult because it rained for two weeks, but in the end, they didn’t want to go back,” said Schobel.

In the center of the island of Reichenau on Lake Constance are the churches of St. Mary and Marcus, St. Peter and St. Paul and St. George, which were built between the ninth and 11th centuries.

The area also preserves the Benedictine monastery, which dates back to 724.

While the churches provide a panorama of early medieval monastic architecture in Central Europe, their wall paintings “bear witness to impressive artistic activity,” and the monastery shows “remarkable spiritual, intellectual and artistic influence,” according to Unesco, so the whole island was designated as a Unesco World Heritage site in 2000.

“The churches, together with the monastery in the center of the island, are the reason why the island has been listed,” said a tour guide from the area.

“Because they’ve been preserved from the ninth century to our present day, together with the fact that people on this island still celebrate traditions where they go around the island carrying important relics of the saints once a year, this contributed to the fact that the island was inscribed to the world heritage list.”

To inform people who visit the 4.3- square-kilometer (1.66-square-mile) island further about the churches and the monastery, there are small museums that give information about the paintings and the history of the sites.

According to the guide, protecting and preserving cultural heritage is an important task here, too.

For example, in St. George, there are long electrical lines that come down from the ceiling, which are sensors that measure the humidity and temperature inside the church. The data gets sent to Stuttgart University and the windows digitally open or close according to the data sent from the sensors.

“To improve the climatic conditions in St. George’s building, physicists and climate technicians have developed a digitally controlled ventilation system,” said the guide.

“Today, the aisle windows are opened and closed by motors controlled by sensitive measuring instruments reaching to the exterior and interior climate-data.”

In Bavaria, in a green Alpine valley, stands the Church of Wies, which is considered a masterpiece of Bavarian Rococo.

The beautiful pastel-colored paintings and detailed shell ornaments are enough to make visitors’ jaws drop, but according to Gunter Reiff, a tour guide from GR Tours, the story behind the church is even more interesting than its beauty.

The whole church was built to accommodate what used to be considered “an ugly wooden statue of Jesus Christ during the Passion of Christ,” said Reiff. Architect Dominikus Zimmermann worked on the church for eight years, assisted by his brother Johann Baptist.

Another fascinating fact about the church is related to its ceiling.

Unlike Baroque churches in which heavy stone ceilings were used, this Rococo-style church has a wooden ceiling. Although flat in reality, the “illusionary painting” says Reiff, makes it look like a big dome.

There are many marble tiles on the walls, but those are also imitations, says Reiff.

“Back in those days, marble was very expensive, so they painted the walls to make it look like marble,” said Reiff. “In order to get the shine, they had to repeat the process of wiping it and repainting it again and again.”

Unlike the stained glass windows of Roman Catholic churches, the windows in the Pilgrimage Church of Wies are made from regular transparent glass, making the inside of the church look different every hour due to different reflections.

The church was inscribed on the Unesco World Heritage List in 1983.