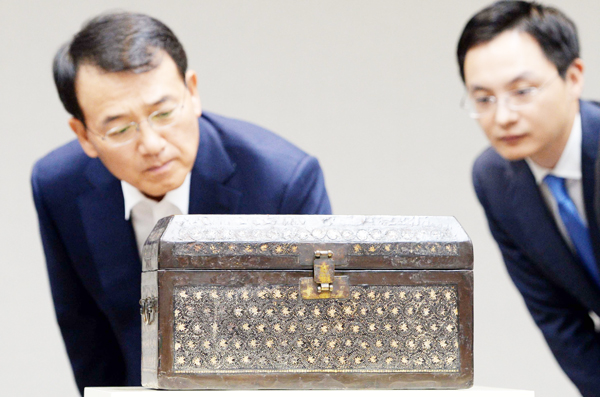 Najeon Gyeongham, a lacquered box inlaid with mother-of-pearl, was shown yesterday at the National Museum of Korea after it was donated to the museum. The container of Buddhist texts decorated with peony patterns is one of only nine boxes known to exist. Korea didn’t own one before yesterday. [NEWSIS]

Korea has acquired a rare Goryeo-era lacquered box decorated with mother-of-pearl, one of only nine such boxes known to exist.

The box, known as Najeon Gyeongham, was made during the Goryeo Dynasty (918-1392). “Gyeongham” means a box that holds Buddhist texts, while “najeon” is a Korean word indicating mother-of-pearl inlays. Until this year, no such box was in Korea.

“It is very meaningful that Korea now has an item that represents the pinnacle of Goryeo-era arts,” said Kim Young-na, director general of the National Museum of Korea, which is the new home of the box.

The museum showed the box to local media yesterday.

There are nine such boxes with inlaid shells of abalone known to exist. Two are owned by the Tokyo National Museum and one each by the British Museum in London, the Museum of Fine Arts in Boston, the Rijksmuseum in Amsterdam, the Kitamura Museum in Kyoto and the Tokugawa Art Museum in Nagoya. The final box is in a private collection in Japan.

Due to the fine inlay work, local experts speculate that these were popular trade items in the late Goryeo to early Joseon Dynasty (1392-1910).

The ninth box was purchased from a Japanese citizen by the Friends of the National Museum of Korea, a private support group, and donated to the museum yesterday.

The box was auctioned in Japan in 2010 and a Japanese national bought it. Since then, the support group had numerous meetings with the Japanese collector to buy it.

The wooden box is about 42 centimeters (16 inches) long, 20 centimeters wide and 23 centimeters high, just large enough to store a scroll. All of the surfaces of the box feature small flower patterns of peonies, one of the most common motifs for Goryeo lacquerware, made of mother-of-pearl. One flower is as small as a fingernail and the largest surface has around 100 flowers inlaid.

“Each of the nine petals that make the shape of the peonies was separately inlaid onto the box to make a whole flower,” said Yi Yong-hee, senior conservator of the museum’s conservation science laboratory.

“Given the fact that Goryeo didn’t have any tiny fretsaws, craftsmen had to work hard to make the box and that’s how Goryeo became known for its crafts.”

There is only one other such box with peony patterns - in Kyoto, Japan. The other seven are inlaid with chrysanthemum patterns.

Goryeo craftsmen seem to have applied thin layers of lacquer before and after the patterns were inlaid onto the wooden box, according to Yi.

Local experts estimate that the box was made toward the end of the Goryeo era, sometime in 12th or 13th century. Chiseled edges make the box look smoother, a distinct feature of Goryeo-era craftsmanship.

Although a study of the box has not been completed, local experts have little doubt that it will be designated a National Treasure. As soon as the study is done, the museum will put the box on public display.