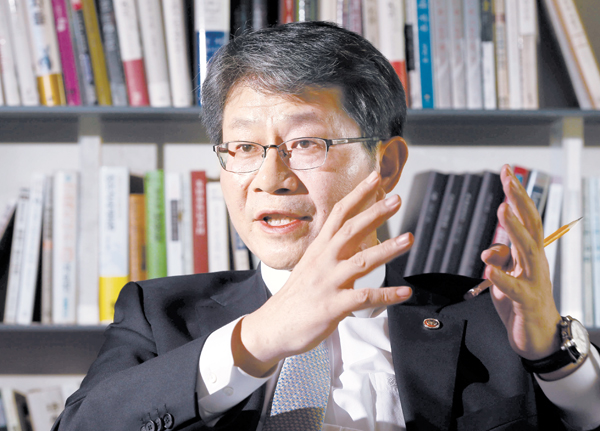 President Park Geun-hye’s ambitious declaration at the start of the year that unification could be a “jackpot” for South Korea is expected to become a major issue for policy makers once her second-round cabinet reshuffle is complete.

Ryoo Kihl-jae, South Korea’s unification minister in charge of all inter-Korean affairs, served as vice chairman of the Presidential Committee for Unification Preparation, a powerful body chaired by the president to start preparing for the unification of the two Koreas.

According to the list of 50 members of the Unification Committee released by the Blue House yesterday, Ryoo serves as one of the members representing the government.

Born in Seoul in 1959, Ryoo graduated from Korea University’s political science and international affairs department, where he also obtained his master’s and doctoral degrees. After working as a North Korean studies professor at Kyungnam University, an advisory member of the state-run National Unification Advisory Council and a professor at the University of North Korean Studies, Ryoo entered the political arena as a policy-making adviser for the Blue House’s presidential secretary for foreign and defense affairs in 2008.

After working as an adviser to the Unification Ministry in 2009, he was appointed as unification minister for the Park Geun-hye administration in February 2013.

The JoongAng Ilbo met with Ryoo at his office on July 7 to ask him about plans for policy making on North Korean affairs, considering the reclusive state’s recent conciliatory moves toward Seoul.

Q. Does the government have any informal communication channels with North Korea?

A. The basic position of our government is to not communicate with North Korea through an informal channel. When North Korea suggested a high-level meeting in February, it wanted talks behind the scenes, but we turned that into an official meeting.

But some people claim an informal channel is necessary between the two Koreas.

North Korea appears to be on a two-track strategy in dealing with South Korea recently, proposing talks and launching missiles at the same time. What do you think is its intention?

There is nothing new. North Korea has always acted in that way. Comparing those moves with its actions between March and May, it is true that North Korea has recently tried to shift the current situation into another phase. Whatever its intention is, we don’t think North Korea is sincerely asking for a dialogue while it continues to launch missiles.

The messages behind its recent statements have nothing special about them. But that doesn’t mean we ignore all of their messages. North Korea has agreed on several inter-Korean interactions and cooperation since June. So we are thinking we can make an overall evaluation of the intention of their several proposals by watching the upcoming situation.

Do you mean the government has not completed judging the intention of North Korea’s proposals?

We have never said we did not want inter-Korean cooperation. The door for dialogue with North Korea is still open. What I mean is that we still need to keep our eyes on whether North Korea has sincerity in its words and actions.

Some analysts claim that we need to talk first, not worry about their sincerity.

Between March and May, North Korea committed several military shows of force and emotionally denounced us with slander and mudslinging. We need to judge what its real intention is based on its future acts.

Despite the Park Geun-hye government’s policy of “trustpolitik,” some say there has been little improvement in inter-Korean relations.

It is true that the possibility to improve inter-Korean relations has been reduced since North Korea’s third nuclear test in February 2013 and its unilateral shutting down of the Kaesong Industrial Complex in April 2013. The trustpolitik is not meant to launch, say, a large-scale business project, but to build up sincere relations with each other first.

Don’t you think the trust-building process could start by meeting with each other?

That is true. We are aware that we should meet to build mutual trust. We are open to any dialogue and inter-Korean cooperation. But in the procedures to pursue the goals, we think we should build up trust by agreeing on the small things first.

How will the government deal with the May 24 measures [sanctions imposed after the sinking of the Cheonan warship in 2010]?

Are the conditions for lifting the May 24 sanctions still in effect?

There is no change in our position calling upon North Korea for taking responsible measures first [to prevent another disaster like the sinking of the Cheonan warship]. If so, our people could accept the lifting of sanctions.

When President Park declared that unification could be a “jackpot,” some people say she expected unification through the absorption of North Korea into the South because there was some expectation that the regime would suddenly collapse after the execution of Jang Song-thaek, the uncle of the North’s leader Kim Jong-un. Is that true?

It is nothing new to claim instability within the North Korean regime. But there is no effective way to absorb North Korea into the South at this moment. Although we are closely watching current affairs in North Korea, particularly after the execution of Jang Song-thaek, there is no sign that the regime is about to suddenly collapse. Although it is true that North Korea showed some instability in its power reshuffle after the execution, I think there is no possibility that North Korea will undergo a sudden change in the near future. I can surely tell you that we are working on policy making from this point of view.

The government recently allowed a South Korean committee that publishes a special Korean dictionary used by Koreans living abroad, including North Koreans, to travel to North Korea. If any civilian groups request approval to visit North Korea for similar reasons, will you approve their visits?

Yes. I had the same thought last year, but visits by civic groups were few due to the North’s closing of the Kaesong Industrial Complex. As North Korea showed no trust in us, we could not send our people there last year. But, in principle, we approve many civilian-level contacts if the political or military situation is not that confrontational. If we build up some trust in inter-Korean relations, we can implement several pending business projects with the state budget, for humanitarian business or cultural projects.

What has been the hardest thing for you as the unification minister so far? And what was your most difficult time?

A really difficult time was when the Kaesong Industrial Complex was closed last year. The hardest thing is to resolve the dichotomy in our society in understanding North Korean affairs. The current administration’s position is to deal with North Korea with unyielding principles and acceptance at the same time, not dividing them into two different things that can be never harmonized. Conservatives and liberals both have dissatisfaction with our policies. It is not easy for us to persuade them both of their merits.