Grant the right of return

Grant the right of return 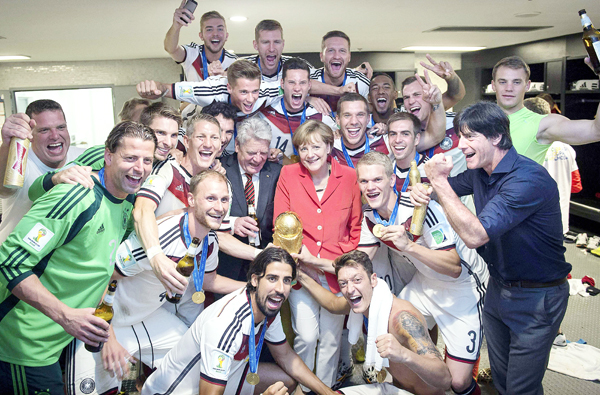 
Germany’s World Cup victory was no coincidence. It was the precious fruit of 10 years of planning and preparation. Diversity was an especially notable factor: Germany selected players regardless of their ethnic backgrounds. The German national team has two players from immigrant families, two half-Germans, and two naturalized Germans. Mesut Ozil is of Turkish descent, and Shkodran Mustafi is of Albanian background and his family is originally from Macedonia. Ozil and Mustafi were born in Germany, which received immigrant workers from Turkey and the former Yugoslavia as well as refugees from the Yugoslav civil war. Ozil and Mustafi are the products of the EU’s open immigration policy. Jerome Boateng was born to a Ghanaian father and German mother, and Sami Khedira’s mother is German and his father is from Tunisia.

Lukas Podolski and Miroslav Klose are naturalized citizens of Germany. Podolski was born in Poland to Polish parents, and as his grandparents had German citizenship. Their family migrated to West Germany when he was two. Klose’s family is ethnic German from Poland and he moved to West Germany when he was eight and knew only two German words. Silesia had been a German territory before World War II and was transferred to Poland after the war. Silesia and East Prussia experienced a similar fate. Most ethnic Germans in the regions left their hometowns, and only a few remained.

All over Eastern Europe there are descendents of Germans who moved there in the Middle Ages. German farmers were known for their agricultural skills, and debt-ridden landlords handed over villages and farms to foreign lenders. After the German farmers settled down in other countries, most of them were kicked out after World War II. Johann Moritz, “a perfect Aryan specimen” in Gheorghiu’s novel “The 25th Hour,” was a farmer in Transylvania, Romania.

Germany granted the “right of return” for people of German descent and gave them German citizenship. It was a type of open nationalism. Germany not only fulfilled its ethical duty to the victimized states of World War II, it also remembered the German diaspora. Klose and Podolski returned to Germany and could play for their national team, winning the World Cup.

The victims of the Korean diaspora and their descendents were similarly victimized by history, but their right of return is not guaranteed. The descendents of independence fighters can obtain Korean citizenship only if they can prove the independence movement activities. In Seoul’s Dongdaemun District, there are ethnic Koreans from the former Soviet Union running Russian restaurants that serve Russian and Central Asian dishes such as shashlik. A Central Asian restaurant named Asia is run by third-generation ethnic Koreans from Uzbekistan and Kazakhstan. Another Russian restaurant is owned by a third-generation Korean Russian and offers a Russian menu cooked by a Korean Russian chef. They are not very fluent in Korean and are struggling to live as foreigners in Korea.

Not so long ago, I spotted the Korean Russians enjoying rice in water with a meat dish and shredded carrots. Eating rice in soup or water is one of the culinary habits of Korean people. The shredded carrot is called koreyskiy salat, or Korean salad. The ethnic Koreans were forced to move to Central Asia in October 1937 by Josef Stalin, and they invented the salted vegetable dish as an alternative to kimchi. Now, it is widely popular across the regions that belonged to the Soviet Union, and you can even find it at Russian supermarkets in London. The globalization of Korean cuisine was made possible by this history.

While these Korean migrants struggled to remember their homeland and maintain their ethnic identity, the Republic of Korea has forgotten about them since independence. The Joseonjok in China were similarly taken for granted. Who but the Korean government will take responsibility for the Korean people scattered across the globe by a turbulent history? They should be guaranteed a return to Korea to live alongside fellow Koreans.

Korean society is diversified with so many migrant workers and interracial marriages. In the flow of diversified culture, we need to discuss ways to grant a right of return to the victims of the diaspora. Those who wish to return should be given permanent residency, if not citizenship. Embracing Koreans with open arms will make Korea the center of Korean people around the world.