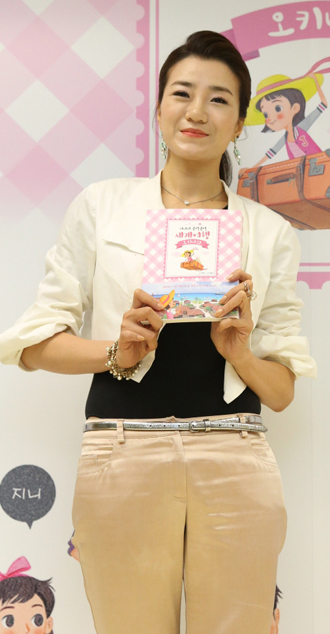 Cho Hyun-min, the senior vice president of corporate communications at Korean Air and the youngest daughter of Hanjin Group Chairman Cho Yang-ho, has built her career so far as a communications expert.

After graduating from the University of Southern California, she started work at LG AD - now HS AD - before joining the country’s largest airline. Today, the 31-year-old, who is also avid user of social networking services like Twitter, is leading corporate communications at KAL and Jin Air, its low-cost affiliate.

But she’s taking her communication skills in a different direction: through a children’s book.

“I did receive a couple of offers to write a travel book in the past, but I turned them down because there were already so many good travel writers out there,” Cho said at a press briefing at KAL’s building in Seosomun-dong, central Seoul. “But inside, I always had a desire to write.”

She added that she often thought about “how to become friends with children as an adult,” and later determined that the right channel to do so would be literature, especially since she was an avid reader herself as a child.

“There are lots of children’s books out there, but I wanted to write a book in which children can have experiences for themselves,” she said. “I thought a storybook would be more familiar to children than a dry information guide.”

Cho’s book, from Hongik Publishing, tells the story of a 12-year-old girl, Jini, who travels the world herself, meeting friends in other countries. The protagonist’s name, Jini, is a reference to the Genie character in “Aladdin,” as Cho hoped her book would grant a child’s wish to see the world.

To grab attention, she also incorporated the color pink, her favorite as well as Jini’s, into the book as much as possible. The fictional airline’s name is Ribbon Air, and even the plane is pink.

“The hardest part was writing from a child’s perspective,” she said. “I read children’s best sellers at the book store, and even went through old books that I read when I was an elementary school student.”

Cho said her experiences as a child are well demonstrated in the book. She revealed that her first experience traveling abroad alone was in the fifth grade, just like Jini.

“I was attending summer school for six weeks and I remember I cried on the phone when talking with my parents,” she said. “But those memories helped me to create the main character Jini.”

KAL’s senior vice president said that her father, who leads the nation’s ninth-largest conglomerate, was a big help behind the scenes, just as Jini’s father is in the book.

In fact, if it wasn’t for my father, the book may not have come out, she said. “Two years ago, I told my parents about the concept and they really liked it,” she said. “I sort of forgot about the idea until one day my father came up to me and asked about the project, which was really a wake-up call for me to prepare the book.”

Cho also confirmed that she has further plans for her children book series, and will release at least two more. Her second book will take place in Williamsburg, Virginia.

“Williamsburg is where visitors can experience how it was like to live during the 18th century, because the history of the United States under the British colonial era is preserved,” she said. “It’s also a great family vacation destination, so I would recommend the place regardless of the book.

“I hope to present my book as a gift to unprivileged children who don’t have opportunity to buy the book. I am determined to keep my word.”