A taste of Korea in London

A taste of Korea in London 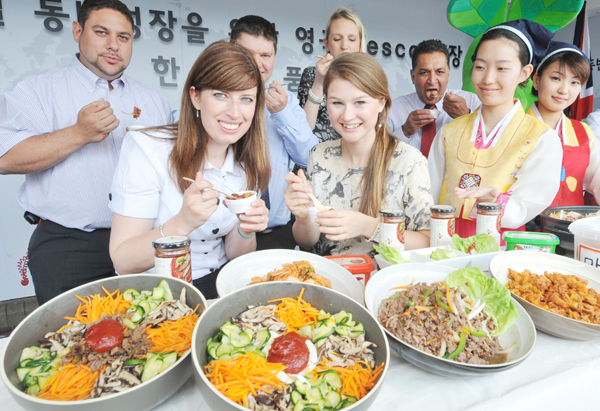 “Pow,” exclaimed British celebrity chef Gizzi Erskine as she danced around the kitchen, putting finishing touches on her roast pork bossam and hot dog and kimchi dolsot bibimbap. She had a crowd of hungry diners at her pop-up restaurant “K-Town” at the Taste of London festival. Like a hyperactive Audrey Hepburn, she set out her plates and went to work on the dessert - hotteok topped with ice cream.

Londoners were ecstatic over spicy ramyeon, bulgogi, dalkgalbi and the treats coming from London’s blooming Korean street food scene. After enjoying a dram of single malt Scotch, curious festivalgoers went to the Korean tent to try a glass of somaek (a mix of soju and beer). Diners at Erskin’s pop-up restaurant left as Hansik (Korean food) addicts. Behind the scenes, chefs, restaurateurs and food industry specialists learned more about Korean ingredients and asked questions about how to use them in their businesses.

Getting people to try Korean food is part of a three-pronged approach to successfully promoting Korean cuisine. First, get people to experience the taste. Then, get chefs to cook it. Finally, show people how easy it is to make at home. The first two steps make Korean food a trend and the final step means the food will stay around longer than other fad cuisines.

I have been closely observing the government’s efforts in the three-part method since it started in 2008. Almost every project was a waste of time and money. Even worse, the government actively competed with and even sabotaged the industry it was trying to promote. There were plans a few years ago to open a government-run restaurant in Manhattan, directly competing against other Korean restaurants there. Rather than supporting existing blogs that were successfully promoting Korean food, the government created its own blog, which failed miserably. At one point, the government said it would support the chef-owner of a Michelin-starred Korean restaurant in cooking a banquet for the James Beard Awards, which are the top food awards in America. At the last minute, the government pulled its funding, forcing the chef to pay for the banquet with his own money.

What’s even more galling is to hear the government take credit for the success of Korean food. They did not help Korean restaurants earn Michelin stars. The chefs and staff of those restaurants did it through hard work. The street food vendors, cookbook writers, bloggers and others did it with no financial support from the government. It was not accomplished by paying K-pop bands huge amounts of money to make embarrassing videos. It was not done through useless studies comparing the sperm counts of men who eat bibimbap versus those who eat foreign junk food. Spending 5 billion won ($4.8 million) to change “ddeokbokki” (spicy rice cakes) to “topokki” didn’t do anything.

Rather than compete with the people who are promoting Korean food, the government should have the humility and wisdom to work with them.

The heart of it is that the government is too locally centered to successfully execute an international campaign. They rarely pay attention to the markets they’re marketing to. They are aware of name brands like The New York Times and CNN, but they hardly know who the big players are in the international food scene. In one incident, powerhouse food publication Gourmet planned to do a TV show on food in Korea, and they reached out to the Korean government for help. But they were roundly ignored because the officials had never heard of them. They only care about what they think are name brands, such as K-pop groups that aren’t as popular internationally as they’d like to think. I’ve heard that their lack of involvement in Taste of London was due to budget constraints. It’s too bad that all those funds were spent on other ineffective projects.

*The author is the founder and president of the Korean food site ZenKimchi International.