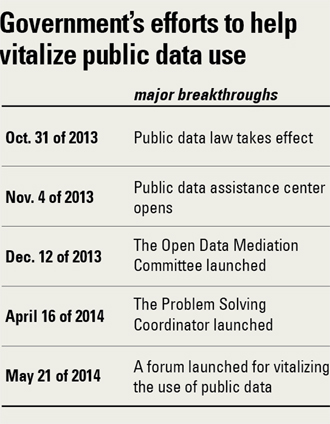 In April, the Loc&All, a local company that manufactures Kimgisa, a navigation app, asked the Ministry of Land, Infrastructure and Transport for data on street signposts across the country. Its right to the information was guaranteed by law.

But government agencies holding the information refused the request, saying there was no precedent of providing such public information to a private entity. In order for a navigation service to be effective, signpost data is indispensable.

Frustrated, Loc&All turned to the state-run Open Data Mediation Committee at the suggestion of the state-funded National Information Society. Under the committee’s mediation, related government agencies had several rounds of negotiations and agreed to provide the data to the company.

“It took a long time to find our way to the Open Data Mediation Committee, but once we took the step, things went pretty well,” says Jung Kwang-hyun, an executive director of Loc&All.

“At first, we were at a loss even as to where to request public information,” he says. “But we came to know there are some websites that we can reference such as www.data.go.kr, and the government mediation system is also being put in place, so we think it will be easier for us to get access to public data as time goes by.”

The Government 3.0 Project, one of the priorities in the domain of public affairs policies under the Park Geun-hye administration, makes it compulsory for the government to open data to the public. The government drafted the public data law to provide the legal grounds for the project, and the new law was enacted in July 2013.

In the initial phase, there were many errors and trials, but the government’s efforts to solve the problems are bearing fruit.

The Open Data Mediation Committee was created to help the public when the government or quasi-public agencies refuse to provide data or suspend access.

If people find out they can’t access public data, they can apply for the committee’s intervention within 60 days. The committee listens to the applicants and offers suggestions through a fact-establishing work and expert advice. If a mediation is reached, it has an effect equivalent to a court settlement.

Since the launch in December, the Open Data Mediation Committee has settled 26 conflicts over public data.

“Awareness is growing that you can get help from the committee related to the public data provision,” says an official of the committee. “More private companies are showing interest in receiving our help.”

The Ministry of Safety and Administration and the National Information Society Agency also launched a joint service called the Problem Solving Coordinator (PSC) to widen access to public data. Under the PSC service, which is available by calling the comprehensive call center (1566-0025), a dispatched coordinator tries to solve problems regarding public data use. If it can’t be done, it refers the case to the public organization that is dealing with the information in question. So far, only six cases have been solved through the PSC service due to low awareness of its existence, but the ministry expects more people will use the service.

One of the companies that received help via the PSC service was MCircle, a company that developed the Hi Doc app that enables real-time checks of dust concentrations and the ultraviolet index.

“Since we got a hold of public data and provided it, the web traffic to use our app service has increased more than tenfold,” says Seo Jung-ho, a general manager of MCircle.

But analysts say there is a long way to go to realize the core spirit of the Government 3.0 Project. Private companies say the government has yet to provide much public data for commercialization.

An official of a company that develops smartphone apps says the government also is not providing public data in a clear way, so the public doesn’t know what they are looking at even if they come to grips with it.

In many cases after a request for data is made, officials must spend considerable time to process it so it is usable, the official says, but “that falls short of Government 3.0, which is to make data access possible for anybody at any time.”

In some cases, the government or public agencies transformed themselves into service providers using the public data, threatening the businesses of private companies.

The Ministry of Security and Public Administration and the National Information Society Agency held a public-private session three times in May to discuss the problem. A company that is providing weather information complained during one of the sessions that its sales dropped more than 10 percent since the launch of Open API service by the Korean Meteorological Administration.

After the discussion sessions, the government set up a temporary guideline to do so. The final guideline will be confirmed next month.

“We will gradually decrease the public data-using services that became a problem,” says Kim Jin-hyung, the head of the Open Data Strategy Council under the Prime Minister’s Office. “Instead, we will provide custom-tailored public data and assist start-ups with good business ideas.”