Activist mayor has a bigger stage to use

Activist mayor has a bigger stage to use 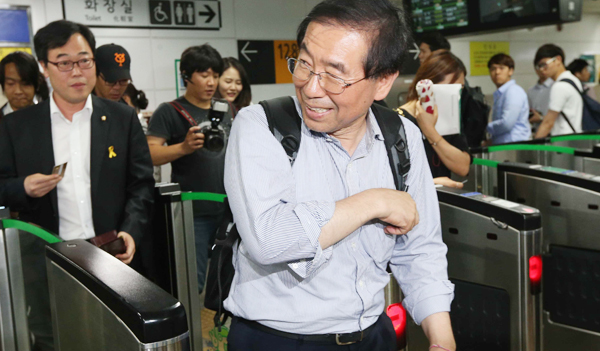 Before my child was born, my wife and I decided to move in with my wife’ family. As soon as we made the decision, my wife ordered 20 paper boxes and sorted out the clothes that were still like-new but she wouldn’t be able to wear after she gives birth. We also put tableware that we wouldn’t need anymore. She made an appointment for collection, and a volunteer from “The Beautiful Store” came to pick up the boxes. A few days later, we received a donation receipt. The value of the goods we had donated was 180,000 won, and we received tax deduction.

My trust on the store originates from indie singer Lee Jang-hyeok. He buys most of things he needs from this thrift store. “Everything I am wearing right now comes from the Beautiful Store. I paid 3,000 won for the t-shirt. I often buy clothes for my son as well.”

The Beautiful Store cleverly utilizes the incentive to move the individuals who are sensitive to interests. You have outfits that you don’t wear any more but still have life to them and associate good memories with. You don’t want to put them in the clothing bin on the street, but it is troublesome to bring them to a thrift store. But the Beautiful Store makes the process convenient with reserved pickup service. The actual customers like Lee Jang-hyeok assures me that a good deal is on, thanks to the Beautiful Store.

Donation is not a mere good will but a deal that brings benefits, discovered Harvard University a few years ago. Harvard Management Company, which manages the university’s endowment of 32 billion dollars, has been contemplating what to give back to the benefactors. The question is how to make donation deal happen. They used the prestigious institution to offer tax, inheritance, health benefits as well as funeral services for the donors.

Seoul Mayor Park Won-soon, the founder of the Beautiful Store, studied at Harvard University and the London School of Economics and Political Science. It is no coincidence that the Harvard system and Oxfam model are applied to the Beautiful Store. Park believes that small changes transform the lives of the citizens and ultimately improves the quality of the society, and his conviction from the experience as a civil activist has led to the policies like “Sharing Seoul,” “Village Communities” and “Creative Economy.”

However, people continue to ask what is the substance of Park Won-soon’s Seoul is. They demand a grander, clearer answer from the leader of a metropolitan with 10 million people. Critics say that he is involved in minor matters only and does not get big projects done. Park argues that two years and eight months have been too short a term to prove anything. In response to his claim, the voters gave him a landslide victory.

My wife and Lee Jang-hyeok’s cases illustrate how Park Won-soon changed the lives of people in Seoul as an activist. Now that he has far greater authorities as a mayor, can he bring out positive changes from our lives? As Park begins his second term, he said, “The first is safety, the second is welfare and the third is economic growth to cover the costs for the first two tasks.” To me, he is trying to make Seoul a better city to raise kids. For my family’s sake, I hope his four-year term is not wasted or result in regression. He has four years until the solemn evaluation.