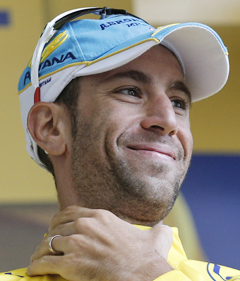 Barring a disaster from now until Sunday, the man who looks set to win the Tour de France - Italy’s Vincenzo Nibali - says he understands cycling is still paying for its longtime doping plague.

Both of cycling’s other “Grand Tours’’ that he has already won were marred by doping. Last year’s Giro d’Italia was tarnished by three positive tests, while in the 2010 Vuelta, Nibali’s runner-up, Ezequiel Mosquera, later tested positive for a masking agent that can hide blood-booster EPO.

But on the rest day Monday before the pack heads to the Pyrenees, the serene, talented and methodical 29-year-old Italian was focusing on the race, saying he wants to make sure he avoids a “crisis’’ like the crashes that forced out rivals 2013 Tour champ Chris Froome and two-time winner Alberto Contador. In post-stage news conferences, he has confidently fielded and answered questions about doping.

“Unfortunately, those questions arise because we’re paying [for] the past years. I try to answer in the most correct way, like I already did at the Giro last year,’’ Nibali said after Sunday’s Stage 15. “I’m here to give the best answers I can and clarify everything about myself.’’

“I’ve always been a flag-bearer of anti-doping.’’

As the race embarks on Tuesday local time for three days in the Pyrenees mountains, Nibali leads Alejandro Valverde - a 34-year-old Spaniard who once served a two-year ban after being implicated in a blood-doping ring - by 4 minutes, 37 seconds. Romain Bardet is third, 4:50 back, and fellow Frenchman Thibaut Pinot is fourth, 5:06 behind. American Tejay van Garderen is fifth, 5:49 back.

A few components go into the calculation to understand those gaps, after more than 66 total racing hours since the start in Yorkshire, England on July 5. They include Nibali’s nearly indomitable performance in the mountains, which often prove crucial to separating the strong contenders from the rest of the pack; his relative strength in the time trial, which looms on the next-to-last race day; and the luxury to focus on the few riders who could threaten him.

If any one of them tries a breakaway in the coming days, expect Nibali and his strong Astana team to lay chase. He’ll be keeping close watch in Tuesday’s 237.5-kilometer (147.5-mile) Stage 16 from Carcassonne to Bagneres-de-Luchon in the Pyrenees. It’s the longest stage this year and features the punishing Port de Bales climb.