Convince North it can be a better society, university president says

Convince North it can be a better society, university president says 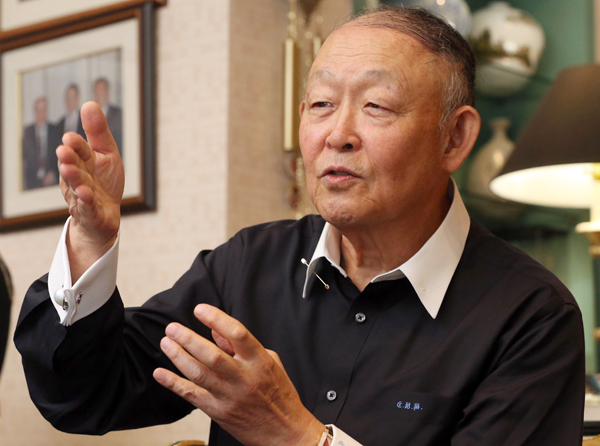 Bang Chan-young, president of Kazakhstan-based Kimep University, warned that a possible collapse of the North Korean regime should not be taken lightly.

“If the reclusive regime suddenly collapses when the peninsula is not ready, its side effects will be enormous,” he said in a recent interview with the JoongAng Sunday. “[The South Korean government] should assure key elitists of the North Korean political circle and military, who have the most power.”

The 78-year-old Kimep president broached the unification issue during his visit to Seoul last week. Although Bang is an economist, he is also an expert on North Korea. He was born in Korea in 1936. He graduated with honors from Yonsei University in 1963, and subsequently moved to the United States to further pursue his studies in economics.

After completing his Ph.D., Bang taught economics at the University of California, Los Angeles and obtained a tenured position at the University of San Francisco in 1978, and for the next 10 years directed the Research Institute of Asian/Pacific Studies there. He published scholarly works on USSR’s economic reform, Korean economic development and on North Korea.

In 1990, Bang was invited by Nursultan Nazarbayev, the president of Kazakhstan, to serve as the vice chairman of the Expert Committee, which the president chaired. The committee’s mandate was to advise the government on economic policy, particularly the introduction of market reforms and privatization in Kazakhstan. During this time, Bang also served as an economic adviser to the president.

He has published a handful of books on North Korea and has worked as an adviser on the Rajin-Sonbong special economic zone issues in the 1990s. He met with Kim Yong-sun, secretary of the Workers’ Party of North Korea, to advise him on how the North should open its economy.

In 1991, Bang led an overhaul of Kazakhstan’s economic system after the country’s independence from the Soviet Union. He is a living historical figure who has helped turn a socialist country into a capitalist one. Bang said he would like to apply his experience to the unification of the Korean Peninsula. During his visit to Seoul on Saturday, Bang will explain his unification model at The-K Seoul Hotel in Yangjae-dong, southern Seoul.

Q. How do you evaluate the Kim Jong-un regime?

A. I project that the Kim Jong-un regime will collapse in five to 10 years. Given the current situation in North Korea, the strongest leaders might be assassinated or just die naturally. In this case, the North’s one-family ruling system started from Kim Il Sung and following the teachings of the dead leader will finally end. The North’s regime has been keeping its legitimacy through hereditary succession of power. But if Kim Jong-un dies, the system will no longer be appealing to the people. Public trust in a regime that is unable to provide even daily necessities will soon break down.

Do you have a plan for unification of the Korean Peninsula?

In response to the North’s collapse, the South should make thorough preparations. First of all, even if the peninsula is unified, the South should give assurance that the elitist group of the North regime will not be affected. It has to convince them that the North can be a better society through unification. The South should support establishing an interim North Korean government consisting of its military and politicians after the Kim regime is demolished in order to turn the hostile relations between the South and North into cooperation. The South should also help the North complete denuclearization and reduce its army from 1.19 million to about 100,00 or 150,000. The South can entice the North to do that by promising to build infrastructure like railroads, ports and power distributors.

As for the cost of unification, there are many different opinions. But in the near future, about $300 billion is estimated to be needed in the 10 years immediately after unification. Providing the North with $30 billion per year will help those who lost jobs after the military is disbanded and it will also support the livelihoods of ordinary people. The post-war compensation that Japan has to pay can also be a part of the North’s financial resources. Then, there is the need to expand the Rajin-Sonbong special economic zone into Haeju, Nampo and Wonsan.

Foreign capital is essential for the North’s economic development. Expansion of the special economic zone, too. If this unification plan and process gets under way, trust between the South and North can be restored, and that will help improve the livelihoods of the North’s people, contributing to a smooth and peaceful unification.

What roles should advanced countries play?

China has the biggest influence on North Korea. It is desirable that the Park Geun-hye government maintains close ties with China. But it has to keep in mind that one of things that China is most afraid of is that it will lose the Korean Peninsula as a buffer zone. In this scenario, there could be a situation of China and the United States fighting over Aprok River. After unification, if the U.S. military decides to stay on the peninsula, it will be the worst-case scenario. China never wants that to happen. Because of this, the South Korean government should be very careful in responding to the U.S. government’s policies that might threaten China’s security. The U.S.-led missile-defense system is one of them. In addition, if a temporary government is set up in North Korea after the collapse of the Kim Jong-un regime, China will play some role. The direction of unification can be determined by how the North’s elite cooperate with China. That’s why the South should increase cooperation with China in many aspects.

What is your opinion of the Park government’s unification committee?

Do you have an alternative?

Given the conditions currently surrounding the Korean Peninsula, South Korea cannot achieve unification with its unilateral measures because of the interests of other advanced countries. The roles of the United States and China will be absolute to Korea’s unification. So, the South shouldn’t see unification from an independent view. For the unification preparation committee to work well, it needs experts who can represent the neighboring countries. There are a number of experts on the Korean Peninsula in the United States, China, Russia and Japan. Among Korean expatriates, there are many good scholars, too. The committee needs to make them part of the group to reduce domestic controversy over the formation of the committee. Along with that, more experts in fields ranging from politics, economy and culture are also needed. Unification will not be as simple as integrating two different lands. It is to make two different societies as one.