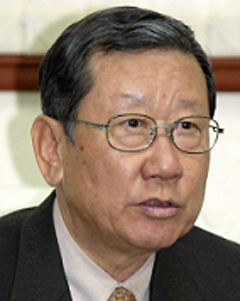 Yoo Heung-soo, the chairman of the board of the Korea-Japan Friendship Association, has been nominated as the new Korean ambassador to Japan, an official in Seoul confirmed yesterday.

The post has been vacant since June 15 after former Ambassador Lee Byung-kee was appointed as the new chief of the National Intelligence Service, Korea’s top spy agency.

“Yoo was named as the next ambassador to Japan, and we have requested the agreement for the new ambassador to the Japanese government,” the official said.

It normally takes a month for a government to approve a certain ambassador from a foreign country, and Yoo is expected to take office in mid-August.

Born in 1937 in Hapcheon, South Gyeongsang, Yoo graduated from Kyunggi High School and Seoul National University’s College of Law. In 1962, he passed the civil servant exam to become a police official, and later worked as a provincial head for the South Chungcheong government and as a vice-minister in the transport ministry.

Yoo is fluent in Japanese and lived in Japan until he was in the fifth grade, attending an elementary school there. He immigrated to Busan with his parents immediately before the outbreak of the 1950-53 Korean War.

He entered the political arena after winning a parliamentary seat in 1985 as a candidate for the then-ruling Democratic Justice Party. Afterward, he won three more races, eventually becoming a four-term lawmaker.

In the National Assembly, he was the former chairman of the Foreign Affairs and Unification Committee and is known as a specialist in Japanese affairs. He is also the former head of the association of Korea-Japan lawmakers.