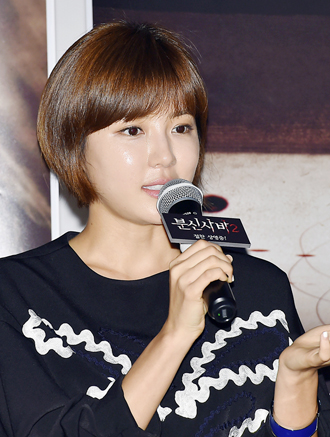 If there was a curse that could summon dead spirits, how many would be up for using it?

This is the question that Korean actress Park Han-byul sets out to answer as she plays Song Qian in her latest film “Bunshinsaba 2.” Directed by Ahn Byeong-ki and released in China before its Korean opening last week, the movie follows Park as she channels spirits to solve the mysterious deaths of her friends.

When asked why she chose the movie, Park responded that it was because of Ahn.

“I chose this movie 100 percent because of director Ahn,” she said. “He’s not a scary director. He makes you feel comfortable. He’s like a close brother.”

Ahn made his film debut with the horror movie “Scissors” in 2000 and has maintained his reputation as a horror movie master following hits like “Bunshinsaba 1” and “Apartment.”

He was even invited to China to make “Bunshinsaba 2,” which was released under a different title there. The movie was a big hit on the mainland, grossing about $13 million at the box office. However, Park admitted she faced some difficulties while filming because the movie was produced on location in China.

“It was hard to communicate at times. I expected this difficulty, but it was harder than I thought. But later on as we worked together, we could tell what the others were saying through hand gestures,” she said.

But while communicating was a challenge, Park said that gauging fans’ responses wasn’t.

“I couldn’t really tell how much they enjoyed the movie, but during the movie premiers, I think a lot of the audience members were excited to see the person they’d watched on screen appear in real life. It was amazing to see the audience try to communicate with me through Korean words they’d written down,” she said.

Having previously starred in horror films “Two Moons” and “Whispering Corridors,” Park seems to be positioning herself as the perfect candidate for future movies in the genre. But the actress insisted she wanted to keep her options open.

“I have a reputation as a ‘Horror Queen,’ but I don’t have a specific way I want to be seen by the audience. Having one word describe you can be nice, but it can also be something of an annoyance. I want to become an actress the audience can trust,” Park said.

“Bunshinsaba 2” was released July 16. Only time will tell if it can distinguish itself from the handful of summer horror movies already out this season.