100 days of solitude for Sewol relatives

100 days of solitude for Sewol relatives

Yesterday, the 99th day since the Sewol ferry disaster on April 16, search efforts were still under way in the waters off Gwanmae Island in Jindo, South Jeolla. Ten people are still trapped underwater. [NEWSIS]

“The ribbons are also changing,” whispers Heo Seung-hwan, 51, looking at the yellow ribbons tied to trees along the road.

“They were all vivid yellow at the beginning. It’s been 100 days already, even though we feel the same day is repeating itself over and over again every day.”

Tears well up in his bloodshot eyes as he reads messages on the ribbons.

“We wait for a miracle,” one reads.

Heo’s daughter Da-yun, 17, was one of more than 300 people who died on the ferry Sewol on April 16 when it had an accident in the waters off Korea’s southwestern coast, capsized and sank. Most of the victims were like Da-yun, 11th graders from Danwon High School in Ansan, Gyeonggi, who were on a school trip to Jeju Island.

But Da-yun is also one of 10 victims whose bodies were never recovered from the wreck of the ferry. Her parents have been keeping a vigil in the town of Jindo, South Jeolla, and don’t intend to leave until they can bring Da-yun’s remains home.

Right after they were told about the accident, Heo and his wife, Park Eun-mi, 44, came to the gymnasium, which has been their home for almost 100 days. 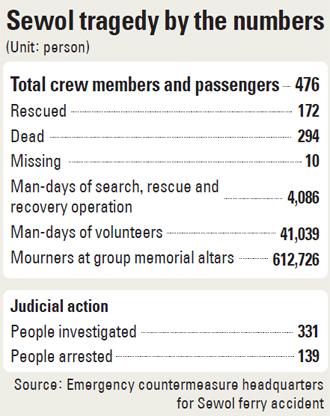 “I heard the news that some of the students were rescued, so we went to Jindo hoping my daughter escaped,” says Heo.

Heo didn’t give up hope while the bow of the ship was above the water’s surface, hoping that the idea that passengers might have survived in air pockets was true. Heo and Park waited for their daughter at Paengmok Harbor, the point on shore of the accident site. But the bow finally slipped beneath the waves.

And Da-yun never came back.

The announcement by the Korean Coast Guard and the Ministry of Oceans and Fisheries that they were doing their best was not consoling.

“I could not believe anything they said because they seemed to be telling lies to the relatives of the victims,” says Heo. “But sadly, they were the only authority that we could depend on at all.”

Their hope turned to despair after a few weeks passed without any more survivors. When 50 days passed, they started traveling every day to the barge at the accident to plead with rescue divers, “Please let us hug her once more, please.”

The husband raises money from other relatives of the victims to send food to the rescuers. They put together about 900,000 won ($878) several days ago to send fried chicken.

Today is the 100th-day anniversary of the Sewol tragedy. Ten people onboard the ferry remain missing, including five students, two teachers and three other passengers. Relatives of all 10 missing people continue to live at the gymnasium in Jindo, which has been their home since they first arrived in the hours after the tragedy.

Once packed with restive and grieving relatives, the gym has emptied out. When the number of missing passengers stayed at 12 for 16 days after a body was found on June 9, Heo could barely sleep out of despair that his daughter may never be found. The only thing that excites him now is news that a new corpse has been recovered. That happened June 24, when a Danwon High School student was recovered. And last Friday, when a crew member’s remains were found.

“When I hear that rescuers have found someone, I feel envious and wonder when I can get her back,” says Heo. “Da-yun often appears in my dreams these days saying, ‘Dad, what are you doing? Hurry and take me back.’”

Almost every day, Heo and his wife climb on board the Coast Guard patrol boat departing from Paengmok Harbor at 9 a.m. When he gets to the site of the wreck, Heo shouts, “Where are you, Da-yun?”

But there’s never a reply.

Lack of sleep and endless waiting are tiring the couple out. They usually fall asleep at 2 to 3 a.m., but wake up at 5 a.m. The couple says they can’t sleep any longer than that no matter how hard they try.

“I have thought about how long I can wait here for my daughter,” says Heo. “The day I leave here will be the day I find her.”

Shin Myeong-seop, 49, is waiting for her 17-year-old daughter Hwang Ji-hyeon, also an 11th grader from Danwon High School. She needs medicine now for the high blood pressure and neuralgia she developed living in the gym for nearly 100 days. Shin’s husband, Hwang In-yeol, 51, often goes to the accident site. He stays there for days but comes back with a gloomy face.

Yoo Baek-hyeong, 54, is waiting for her husband Yang Seung-jin, 58. He is one of two teachers from Danwon High School who hasn’t been found yet.

Yoo is suffering memory failure along with pains in her knees and waist.

“I don’t care about my health,” she says. “I need to find my husband and send him off to heaven.”