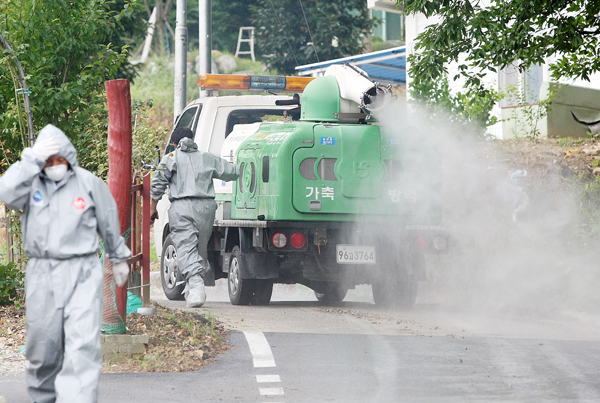 An outbreak of highly contagious foot-and-mouth disease (FMD) was confirmed yesterday at a local hog farm, three years after the deadly virus swept the country and led to the slaughter of thousands of pigs and cows nationwide.

The Ministry of Agriculture, Food and Rural Affairs said in a statement yesterday that quarantine officials confirmed a total of 600 pigs were infected by the disease at a farm in Uiseong County, North Gyeongsang. All of the infected animals were culled by authorities yesterday.

Local officials said the owner of the farm reported suspicious symptoms in about 200 pigs on Wednesday and they found an additional 400 with symptoms such as toenail loss or blisters. There were a total of 1,500 pigs on the farm, officials said.

To stop the disease from spreading, officials designated areas in a 15-kilometer (nine-mile) radius of the farm under strict quarantine, restricting traffic and other human contact. Vehicles up to 10 kilometers away from the farm should be sprayed with disinfectant, officials said.

“There is no other animal farm within 500 meters of the hog farm,” Shin Hong-yeol, a local government official, said. “However, in a three-kilometer radius of the farm, there are 3,397 animals, including pigs and cows. That’s why we set the quarantine area up to 15 kilometers from the farm.”

When the JoongAng Ilbo visited the farm, officials were putting the culled pigs into a plastic tank temporarily installed on the farm. They feared that if they buried the pigs, the infected bodies could contaminate underground drinking water and cause other environmental problems.

The farm’s owner said he bought the pigs from another hog farm in Goryeong County, North Gyeongsang, but officials confirmed yesterday that animals on that farm were not infected.

With yesterday’s outbreak, South Korea has lost its status as an FMD-free country with vaccinations, which it obtained on May 28 this year at the general meeting of the World Organization for Animal Health (OIE) in Paris.

The status is given to a country that has not been infected by an FMD virus for three years.

The last reported outbreak of the disease in South Korea was on April 21, 2011.

The Agriculture Ministry yesterday said it notified the OIE and other concerned countries about the outbreak.

The ministry said in the same statement that the possibility of the virus spreading through the country is low given the fact that the serotype of the virus found yesterday was Type O, which the South Korean government has obtained vaccines against.

Officials said they assumed the outbreak was caused by some pigs at the farm that were not vaccinated by mistake.

South Korea suffered the worst FMD disaster between November 2010 and April 2011, which first broke out at a hog farm in the southeast of the country but quickly spread through most of the country, including the southern island of Jeju. It cost 3 trillion won ($2.9 billion) of state funds to cull approximately 3.5 million animals.