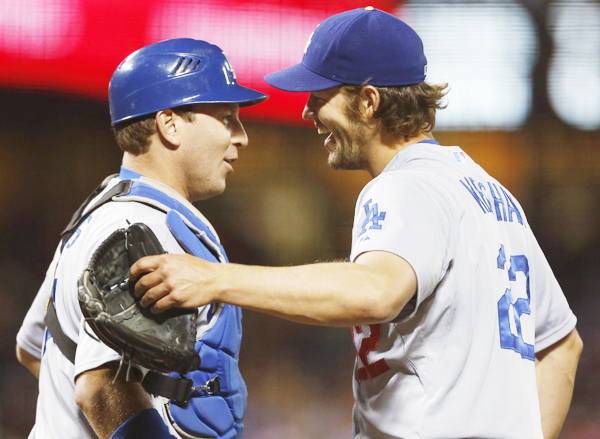 Clayton Kershaw continued to spoil his manager with another brilliant performance.

Kershaw pitched a two-hitter to win his ninth straight decision, leading the Los Angeles Dodgers to a 5-0 victory over the San Francisco Giants on Saturday night.

“You end up counting on him to go at least six,” Dodgers Manager Don Mattingly said. “If you don’t get to him early, he winds up with a low pitch count. That’s when you start to get spoiled.’’

Adrian Gonzalez had three hits and an RBI and Juan Uribe had two hits and two RBIs to help the Dodgers move into first place in the NL West, a half-game ahead of the Giants, who were shut out for the 11th time.

“You don’t take for granted being in first place,’’ Kershaw said. “We know those guys will be right there with us to the end. We know we have to win a few more games to stay in first.’’

Kershaw (12-2) walked one and struck out seven in his ninth career shutout and second this season. It was also his fourth complete game of the year and 15th of his career. The left-hander improved to 12-6 with a 1.40 ERA in 23 career games against the Giants, including 7-2 with a 0.69 ERA at AT&T Park.

“It’s fun to win,” Kershaw said. “I’m happy now but if I lose the next time out I won’t be happy. We kept scoring runs and it seems like if I can keep throwing zeros the first three innings we have a good chance. It’s been holding true.’’

Kershaw has made 15 consecutive quality starts against the Giants, the most by a pitcher since Bob Gibson had 16 straight between 1968-72.

Ryan Vogelsong (5-8) retired the first 11 batters before Hunter Pence lost Gonzalez’s double in the sun with two outs in the fourth. Hanley Ramirez followed with an RBI single.

“Vogey has had some tough luck, whether it’s the run support or things going awry,’’ Giants Manager Bruce Bochy said. “The sun played a part in it tonight and it cost us a run.’’

The Giants have been shut out in four of Vogelsong’s last five starts and the right-hander has received an average of two runs per game of support at home, the second-lowest in the NL. Vogelsong lost his fifth straight decision, matching his longest such streak since 2011.

“I stopped making good pitches is what happened,” Vogelsong said. “I can’t put a finger on it other than I missed some spots and they got some hits.’’

Joaquin Arias was the lone Giants hitter to reach as far as second base against Kershaw and he reached on a fielding error. Michael Morse singled with two outs in the seventh.

“He was unbelievable,’’ Uribe said. “It seems like he can that do that every time.’’

Uribe, who has 17 RBIs against his former team since leaving after the 2010 season, drove in runs in the fifth and sixth. Yasiel Puig scored on Dan Uggla’s throwing error in the sixth.

Gonzalez singled home a run in the seventh.