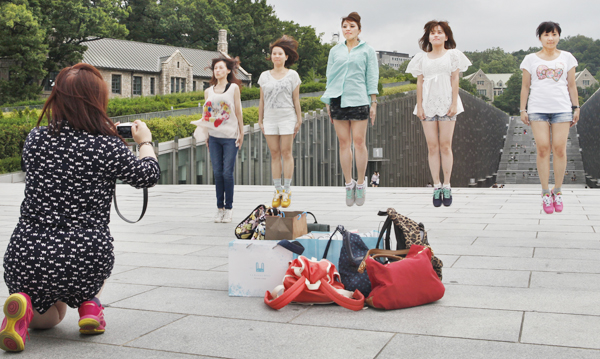 Chinese tourists pose for a photograph while dancing like K-pop group Crayon Pop in their hit video “Bar Bar Bar” on the campus of Ewha Womans University in western Seoul. By Park Sang-moon

For Xiao Lei, a 30-year-old office worker from Beijing, visiting Korea was all about following in the tracks of Kim Soo-hyun, the actor of the television drama “My Love From the Star,” which has become a mega hit in China.

“I came to visit places where Kim was filmed,” said the tourist, who was on a six-day trip around Korea with a friend.

But last Tuesday afternoon, Xiao made a pilgrimage to a destination that had nothing to do with heartthrobs, TV series or Hallyu - the so-called Korean Wave of entertainment that includes dramas and pop music. She made her way to Ewha Womans University in central Seoul, one of Korea’s ivory towers of learning.

She was not alone. In fact, Chinese tour buses were lined up near the campus.

“I found many Chinese tourist sites that recommended visiting Ewha because of the beauty of the campus and its students,” Xiao told the Korea JoongAng Daily.

“I also heard Ewha students are very modern and fashionable. I wanted to see how they dress.”

Xiao is one of hundreds of Chinese tourists flocking to the country’s first women-only university on a daily basis. When the Korea JoongAng Daily visited the well-groomed campus last week, flocks of Chinese tourists were wandering around throughout the day, busy taking pictures at various locations. Whole families tromped around together, although most groups were made up of women.

“On weekdays, up to 500 tourists visit the campus each day,” said a school administrator, who spoke on the condition of anonymity. “On weekends, it goes up to 700 Chinese people pouring into the campus.”

At the start of the phenomenon two years ago, the students were flattered, thinking the visitors were a sign of Ewha’s rising reputation around the region and world. But now they say the visitors have crossed the line, with their lack of respect for their privacy and their need to study. One of the main concerns among students is the Chinese tourists taking pictures of them without their consent.

“Some Chinese tourists take random pictures of us walking on campus and many students end up being posted on Chinese tourist sites without us even knowing,” said Park Ji-na, a junior majoring in mathematics at Ewha. “I am constantly worried about being photographed while on campus.”

“Some Chinese are taking their wedding photos here on campus while others dress themselves in graduation gowns to have their photos taken,” said Kim Ga-yeon, a sophomore majoring in French. “They come into the library and even the indoor gym, taking shots of students on treadmills.”

The Ewhaian, an online student community site, has a warning to all students: “At the Starbucks [in front of the school’s main gate], Chinese tourists are taking random pictures of students with their mobile phones. Be careful, girls.” 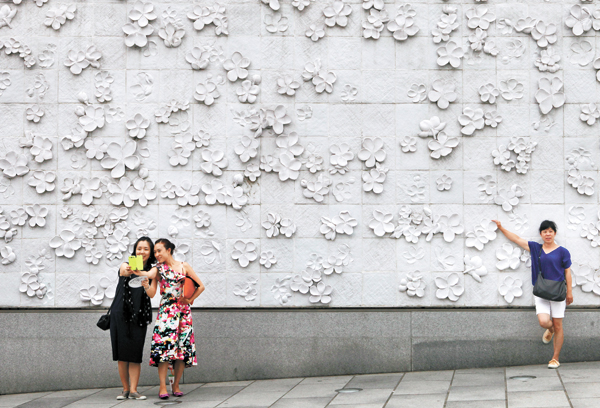 Chinese tourists pose at a wall near Ewha Womans University’s main gate adorned with ceramic flowers. An urban myth says the flowers had to be rebuilt after so many were purloined by the visitors from China. By Park Sang-moon

The school’s popularity piggybacks on the Chinese tourists’ real inspiration for visiting Korea, which is an interest in the Korean Wave.

But the school has a special attraction for Chinese due to its name.

In Mandarin, Ewha sounds similar to “lifa,” which means “bringing fortune.” Chinese tourists hope that a visit there will expose them to the lucrative, positive energy generated by the school.

And the school’s reputation for graduating young women who go on to break the glass ceiling cements its reputation as a place to get to know.

The Ewha official said Chinese parents are bringing their daughters to campus to “bring good luck to them” in their studies.

Many are now comparing the institution to Harvard University in Boston, also a popular tourist attraction due to its outstanding academic history.

While visiting Harvard, touching the left foot of a statue of John Harvard, the school’s founder, is a tradition.

At Ewha, Chinese tourists touch the pear blossom-shaped ceramics on a wall at the main gate. The Chinese characters for Ewha mean “pear blossom.”

An urban myth on campus is that so many ceramic blossoms were broken off the wall by Chinese tourists that the school was forced to rebuild the installation last year - and rebuilt it in a way that the blossoms were too hard to be removed. A school official denied the story.

In response to growing complaints, however, the school’s administration has taken steps to prevent Chinese tourists from getting out of hand.

“You can no longer get into a classroom without an official ID,” said a representative of Ewha’s public relations team. “That’s to prevent outsiders from coming in.”

The school asked the Korea Association of Travel Agencies to instruct Chinese tourists to refrain from behavior that could disrupt the academic atmosphere, such as taking wedding photos and entering classrooms.

“We hope foreign tourists understand the special nature of this place as an educational and research institution and act in a respectful manner that meets the global standard,” said the school in a statement released Monday.

But Ewha’s popularity has been a boon for stores near the campus. With signs written in Chinese, many shops that sell clothes and cosmetic products employ staff who speak Chinese.

“About 90 percent of our sales come from Chinese tourists,” said an owner of the shop named Edggia, which has a sign in Chinese proclaiming that all items are sold for under 10,000 won ($9.70). “The Chinese are an indispensable part of our business here.”

Park Eun-kyoung contributed to this report.