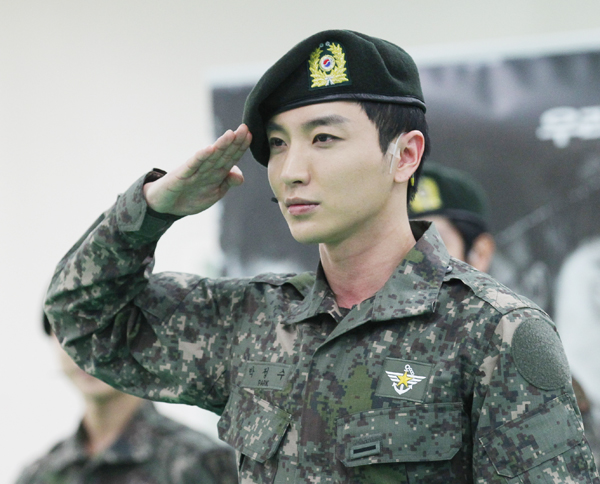 The celebrity refused to comment as he walked out of the military base in Inje, Gangwon, where he was being discharged from, although many reporters and fans were waiting to see a glimpse of him.

Lee-teuk previously made clear his intention to walk out of the base without fanfare to his agency, SM Entertainment.

It is said that Lee-teuk wanted to keep quiet as he was once an entertainment soldier.

Many local celebrities were serving their duty by using their talents as singers or actors, but the scheme was disbanded last year after some entertainment soldiers were caught drinking alcohol and visiting a massage parlor.

Although Lee-teuk wasn’t one of the soldiers revealed in the documentary program that initially reported on the issue, it seems that he is trying to keep a low profile as he was also an entertainment soldier at the time.

Many speculate that Lee-teuk also wanted to avoid media attention because of a family issue that was widely reported on by major news outlets in January.

The singer will join his group immediately to embark on its sixth world tour. “Super Junior World Tour Super Show 6” will start in Seoul on Sept. 20 with a two-day concert before moving elsewhere, including Japan, China and Thailand.