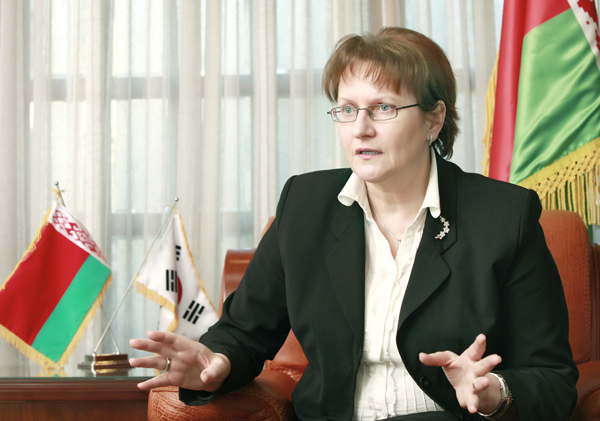 July 30 marks the new World Day against Trafficking in Persons proclaimed by the United Nations.

“Human trafficking is an increasingly pressing issue and a major challenge for the international community in the 21st century,” said Belarusian Ambassador Natallia Zhylevich. “It is estimated that hundreds of thousands of people annually, especially women and children, become victims of such crimes.”

Belarus is one of the first counties to intensify international anti-trafficking cooperation.

At the United Nations’ 2005 World Summit, Belarus proposed to step up international anti-trafficking efforts and presented the platform of the Global Partnership against Slavery and Trafficking in Persons in the 21st Century, which the ambassador said helped to “foster a concerted UN response to this heinous crime.”

The Korea JoongAng Daily conducted written interviews with Zhylevich and Park Mi-hyung, head of the Seoul Office of the International Organization for Migration (IOM), who discussed human trafficking and international and Korean efforts to prevent it.

The 156-member IOM, headquartered in Geneva, was established in 1951 as an inter-governmental organization affiliated with the UN to promote international cooperation on migration issues.

The IOM Seoul office officially opened in 1999 but had begun operations in Korea in 1991. According to the IOM, as many as 800,000 people are trafficked across international borders annually, with many more trafficked within the borders of their own countries.

“The importance of regional cooperation cannot be stressed enough, especially cooperation among neighboring countries,” Park said. “Human trafficking is a transnational crime; it involves nations as source, transit and destination countries. We need to remember that not a single country on earth is free from human trafficking crimes.”

The issue is a big concern in Asia, Park pointed out, because among all the victims of trafficking assisted in 2011 by the IOM, 34 percent were from southeastern Europe and Central Asia, and 25 percent were from the Asia-Pacific region.

Q. July 30 is World Day against Trafficking in Persons, and Belarus has been an active proponent of efforts to stop trafficking. What is the significance of this day?

A. The international community has significantly progressed in understanding and fighting the crime of human trafficking over the past two decades. Throughout the 1990s, it was primarily viewed as, and often confused with, illegal migration. And only in 2000 did the international community make a clear distinction. It then inaugurated a specific approach to fighting trafficking in persons. Belarus believes that establishment of the World Day against Trafficking in Persons will make additional contributions to the joint efforts of member states, international organizations, civil society and the private sector to strengthen international cooperation to prosecute and punish offenders and protect victims of human trafficking.

What steps has Belarus undertaken to tackle human trafficking?

How is Belarus working in the international arena on this issue?

During the past eight years Belarus, together with partners from all around the world, has initiated a number of anti-trafficking resolutions in the General Assembly, the Economic Social Council [ECOSOC] and other organizations. In collaboration with ICAT Members, including one of its most valued partners - the IOM - Belarus has implemented dozens of projects aimed at the prevention of trafficking, the prosecution of traffickers and protection of victims. About 1,000 law enforcement professionals from Belarus and all around the world have been trained at the International Training Centre for Migration and Combating Human Trafficking in Minsk since 2008. Belarus contributed a lot to the creation of the UN Trust Fund for Victims of Human Trafficking, a fund helping especially women and children. 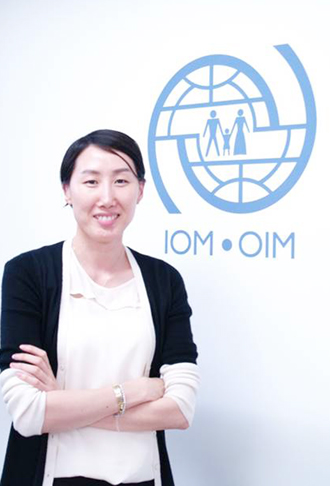 Park Mi-hyung, Head of the Seoul Office of the International Organization for Migration (IOM)

What measures are being undertaken at the moment to combat the issue?

A list of concrete measures planned until 2017 aimed at implementing the Global Plan of Action are to be presented by the United Nations Office on Drugs and Crime [UNODC] and other ICAT members at the 69th session of the UN General Assembly [which convenes in September]. We are looking forward to the next Global Report on Trafficking in Persons to be produced by the UNODC in 2014, pursuant to the Global Plan of Action.

Park Mi-hyung, head of the Seoul Office of the International Organization for Migration

What are the key areas that need to be tackled in order to end human trafficking?

To tackle human trafficking, the supply and demand need to be addressed. On the supply side, human trafficking is now the fastest-growing international crime, generating enormous profits to transnational organized crime groups. Traffickers tend to think there is little or no risk of punishment, due to the difficulty in identifying victims and prosecuting traffickers. In addition, it is very important to educate people about the dangers of human trafficking and the traps laid by traffickers.

This can be done through awareness-raising campaigns and other information-sharing platforms. As for the demand side, it is important for buyers and employers of trafficking victims to be aware that they are committing a crime. As long as people buy and exploit people, there will continue to be a market for them. If demand goes down, the supply will have to go down as well.

Trafficking of humans is a form of modern-day slavery - what can Korea and other countries do to contribute and spread awareness?

Korea is now facing a new challenge, the child sex tourism in Southeast Asia. Child sex tourism can be understood as a form of human trafficking, as it encourages child trafficking by creating new demand. Also, despite what many people assume, buying sex overseas is just as illegal as buying sex in Korea. Therefore, Korea, as a sending country, needs to conduct awareness activities to inform the general public about the harmful consequences of child sex tourism while strengthening law enforcement efforts. The receiving countries in Southeast Asia, on the other hand, need to see child sex tourism not as a source of income but as great loss of human capital, and come up with measures to end this cycle of tragedy.

Korea also is a source, transit and destination country for human trafficking; however, this issue is not very publicly discussed or known here. What can be done to address the issue here?

IOM Seoul has put a lot of effort into raising these issues by talking to the government and collaborating with NGOs. The most recent example is the 2014 International Symposium on the Prevention of Sex Trafficking, which IOM Seoul co-hosted with the Ministry of Gender Equality and Family.

Apart from that, IOM Seoul has conducted research to assess the human trafficking situation in Korea, facilitated a series of seminars and conferences to bring together government officials, academics and civil society in Korea to discuss this issue. It has also provided capacity-building programs to provide services for victims of trafficking [as well as] publications on counter-trafficking, include training modules and a handbook on the topics of victim identification, interview techniques and direct assistance for victims.