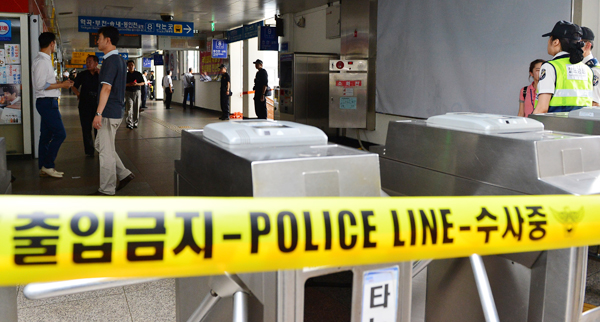 Guro Station, in southwestern Seoul, is monitored by the police after a fire broke out at a building attached to the station. The fire stopped operation of all trains that passed through for nearly two hours. Hundreds of passengers were evacuated as the smoke spread through the building and the platform area. [NEWSIS]

A fire broke out yesterday morning at the Guro Station, in southwestern Seoul, halting nearby subway and passenger trains for nearly two hours.

As the fire, which started in a restroom on the third floor of a building attached to the station, spread smoke across the building and into the station, hundreds of people were evacuated. No casualties have been reported.

The incident was first reported via the 119 emergency hot line at 9:57 a.m. by an employee of the Korea Railroad Corporation (Korail), the operator of subway line No. 1 and the passenger rail trains that pass through the station.

The fire was put out at around 10:16 a.m. after 116 firefighters and 37 vehicles, including fire trucks and ambulances, were dispatched to the scene. In the meantime, the smoke from the fire spread through the building and the station’s platforms, where hundreds were evacuated.

The fire also damaged the distribution board located near the restroom, cutting out power at the station and downing its train signaling system.

But some passengers complained that the trains did not come into the station at the time announced by the operator.

“I came to the station because I heard that [Korail] resumed the operation of its trains, but I’m embarrassed because they are not letting us board the trains without giving specific instructions,” said Jo Eun-jin, 34, a passenger who got to the station at 11:30 a.m.

Actual operations restarted at about 12:12 p.m., keeping passengers waiting for nearly two hours after the fire was extinguished.

“We made an announcement that a fire broke out in the station, but the passengers could not hear it well because the power was cut,” said a subway station official. “So 15 station employees went down to the platform and evacuated passengers.”

Police and firefighters suspect the fire resulted from an electricity problem, such as a short circuit, and are working to figure out the exact cause.

Guro Station has suffered a string of incidents recently.

On April 14, more than 2,000 passengers on one subway train had to transfer to another train after it experienced a problem with its doors. Earlier that month, the power supply between Seoul Station and Guro Station went down, delaying 10 subway trains.

A railway malfunction in the station in November also resulted in a subway train blocking train traffic for about an hour.