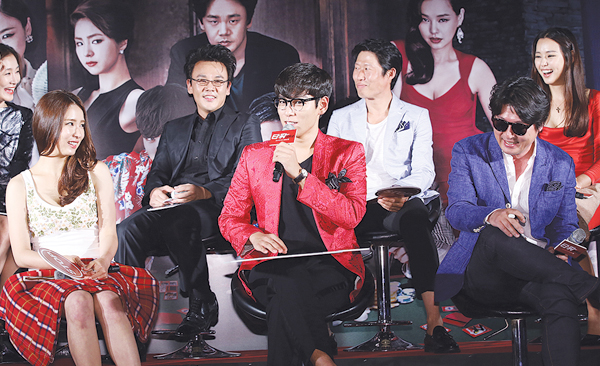 Front row, from left: Shin Se-kyung, Choi Seung-hwan and Kim Yoon-seok and the rest of the star-studded cast talk about their upcoming film “Tazza 2: Hand of God.” Provided by Lotte Entertainment

With a total of eleven cast members and director Kang Hyun-chul lighting up the room, the press conference that took place on Tuesday at Lotte Cinema for “Tazza 2: Hand of God” was quite a spectacle.

The film, directed by Kang Hyun-chul, who was behind hits like “Sunny” (2011) and “Speedy Scandal” (2008), is leaving many wondering if it will top its prequel, “The War of Flower” (2006), which garnered more than six million views.

The sequel is again based on the addictive game of hwatu - a Korean card game - and introduces some new characters. One of these is Big Bang member Choi Seung-hyun, who plays Dae-gil, the cousin of the prequel’s protagonist Goni (Jo Seung-woo). Dae-gil proves himself worthy as the great card dealer’s relative with his flair for the game.

“I was under a lot of pressure. The previous movie was popular amongst adults rather than people my age,” said Choi.

“The plot can seem similar in some ways, but as each movie has a different director they are unique,” said Kang on taking over from Choi Dong-hoon.

“I learned hwatu for the first time for the movie. Later on it got so fun I almost thought I could get addicted,” said Shin Se-kyung who plays Min-a, a love interest of Dae-gil.

If the chemistry between Choi and Shin isn’t enough, Yu Hae-jin and Kim Yoon-seok’s return eight years after the original should cause a thrill. New characters played by Lee Kyung-yeong and Kim In-kwon, among others, are also much anticipated.

Based on the cartoon by Heo Yeong-man, this is the second movie of the “Tazza” series, which is divided into four parts. The star-studded film is set to be released during the Chuseok holiday. Whether it will meet the original movie’s standards or not is worth gambling on.