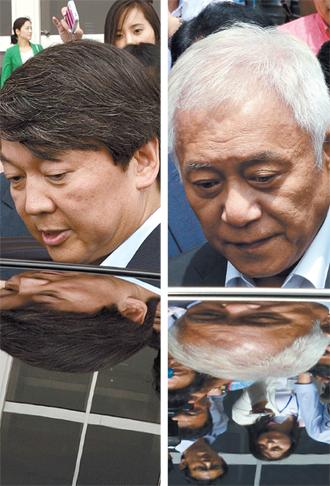 Shaken by stunning defeats in Wednesday’s by-elections, two leaders of the major opposition party, the New Politics Alliance for Democracy, resigned from their posts yesterday along with 18 other supreme council members, illustrating the dismal state of the party and the sense of panic pervading it.

“We lost elections that we should have won. I intend to resign from my post to take all responsibility,” said the somber-faced co-chairman, Kim Han-gill, to a pack of reporters at the National Assembly yesterday, just hours after the embarrassing election results were tallied in 15 races nationwide.

Kim said he would continue to work “to restore the trust of the people” in his party, but would be doing it as a back-bencher rather than a leader.

The other co-chairman of the party, Ahn Cheol-soo, also quit, telling party leaders that he wished he had done things better. Ahn, who was once seen in some quarters as a young Turk who would revolutionize Korean politics, has stumbled recently in several political moves.

“A party leader ought to take responsibility. I will do my best as a regular member of the party,” Ahn said at the meeting where he tendered his resignation.

Following the leaders, the party’s 18 other supreme council members also quit their positions. The party is now led by Acting Chairwoman Park Young-sun, the floor leader of the party. A new leadership team will be elected at a party convention, although plans for the convention and its timing have not yet been determined.

The resignation of Ahn and Kim came in the wake of the trouncing of NPAD candidates in Wednesday’s elections, which was an embarrassment heightened because of the scale of the elections. The 15 open seats were the most ever up for grabs in a single by-election cycle. After the vote, the Saenuri holds 158 seats in the 300-member Assembly; NPAD has 130, with the balance split among minor parties and independents.

Six constituencies in Seoul and Gyeonggi were considered pivotal for both parties because they reflect the political pulse of the capital area. NPAD managed to win only in Suwon D District in Gyeonggi, which sent a former TV journalist, Park Kwang-on, to the Assembly. Both the Saenuri and the NPAD worked hard in those races, reflecting the high stakes involved. The opposition fielded high-profile politicians like Sohn Hak-kyu and Kim Du-kwan, former public administration minister, in districts in Suwon and Gimpo. The fact that these two respected figures lost to much lesser-known Saenuri contenders added to a sense of NPAD despair.

The opposition was also struck a psychological blow by its loss in a race in Suncheon City/Gokseong County in South Jeolla to Lee Jung-hyun of the Saenuri, a defeat it did not see possible in its traditional stronghold. The NPAD victories in the other three elections in the Jeolla region did little to erase the sting of the Suncheon result.

Lee’s victory there, which was the first time a conservative party candidate won in South Jeolla in 26 years, was hailed by the Saenuri as a sign that the opposition stranglehold on the region may be loosening and a first step toward ending the heavy regional slant of Korean politics. The fact that the opposition lost all three races in the Chungcheong region in the country’s midsection also added to the pain. That region is less prone to regional bloc voting, and a popular political saying calls a victory there a necessity for winning the presidency. Saenuri’s victory was perhaps more surprising because in the June 4 local elections, the NPAD won all the contests for the heads of metropolitan city offices in the region.

Given the scale of the disaster, the resignations of the party’s co-chairmen was a foregone conclusion, but it greatly damaged the political stature of Ahn Cheol-soo, once a rising star with a clean image praised by young voters and those disenchanted with the political establishment. He quit the leadership post just four months after taking the position, with his earlier promise to foster a “new politics worthy of public trust” in tatters. Many political observers now say Ahn, once thought of as a strong presidential candidate in the near future, will never regain the political influence and stardom he once enjoyed.

“Ahn’s potential as a politician was destined to fail because he was liked by people disenchanted with conventional politics. Once he stepped into the ring, he already lost his political strength,” said Cho Kwang-hwan, head of the political consulting firm Makers 10, in a phone interview with the Korea JoongAng Daily. On Ahn’s presidential potential, Cho said, “It is about 97 to 98 percent likely that he will never recover that potential.”

The opposition’s crushing defeat also raised questions about the NPAD’s campaign strategy. During the two-week campaign, the opposition went into full attack mode against the Saenuri and the conservative administration for its allegedly bungled response to the sinking of the Sewol ferry, and called on voters to pass judgment on their faults instead of proposing policy positions tailored to each district. The NPAD leadership selected nominees, which also eroded the party’s claim to be practitioners of “new politics.”

“There are many factors that led to the disappointing results. The major one was the leadership’s nominations,” said Representative Chun Soon-ok of the NPAD. “The worst one was to name Kwon Eun-hee to run in Gwangju District. We felt public sentiment turning on us during the campaign.”

While the NPAD fell into disarray with the absence of a party leader, the landslide victory on Wednesday gave a boost of confidence to the ruling party, which pledged to give its full cooperation to the governance of the Park administration. Saenuri’s newly elected chairman, Kim Moo-sung, however, was cautious about the party’s overwhelming victory.

“Voters chose our candidates to do good for the country and to reflect on past misdeeds, not because we governed so well,” said the 63-year-old leader during a supreme council meeting yesterday.

With an increase of 11 lawmakers to its roster and added confidence, the ruling party is expected to throw its full support behind the Park government’s deregulatory measures to revive the economy and reform policies to fix social ills laid bare by the sinking of the Sewol.