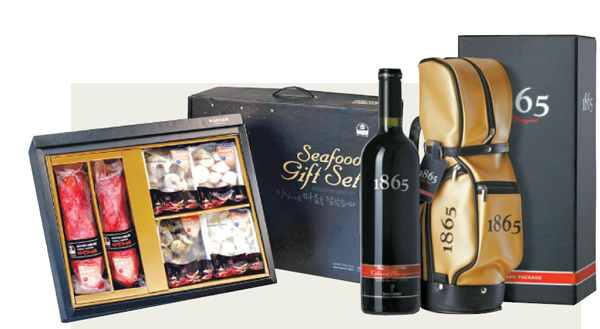 Online and convenience stores are offering Chuseok sets such as a seafood set, left, and the 1865 golf carrier set from 7-Eleven. Provided by 7-Eleven

With Chuseok coming earlier than usual this year, gift buying for the holiday has already begun. Normally, ahead of the celebration, consumers visit discount or department stores to buy gifts for their friends and family.

But the country’s wired population has led to a new trend. Consumers now have more options as online retailers and convenience stores have joined the competition, selling a wide range of gift sets.

“Many consumers are already buying presents especially because Chuseok falls earlier than other years and many of them want to prepare gifts before they go on summer vacation until early September,” said Kim Eun-shin, a kitchenware manager at Auction, an online shopping mall. This year, Chuseok falls on Sept. 8 and the holiday period lasts from Sept. 6 to Sept. 10.

Another vendor, GMarket, is putting on an “Early Bird” event giving customers a 50 percent discount on four items at the shopping mall every day. The items will change each day.

With a growing number of online shoppers in Korea, online malls are hoping for big sales ahead of the Chuseok holiday. Auction has already launched a weeklong promotion for two different items every day.

Industry sources said that fast and efficient delivery systems are giving online vendors a boost, because they don’t have to shy away from items that were previously considered best when bought from stores. On its meat package sales page, Auction reassures its customers that the packaging is secure and will keep the meat safe from the heat.

For those who prefer to see products before buying them, a trip to a nearby convenience store may pay off. While most stores offer traditional Korean beef galbi (barbeque rib) gift sets and fruit gift baskets, many are also coming up with novel ideas to target young customers and families. For example, 7-Eleven is selling headphones, wine, and even tour packages among its Chuseok gift items. It offers free delivery service until Sept. 3 and “3+1” and “5+1” deals, in addition to a raffle for “tired moms” (spa tickets), “students” (amusement park tickets) and “singles” (registration at a matchmaking company).

All the deals and promotions may be enough to sway customers away, but department stores have their own perks. Shinsegae said it will have a three-week free shipping period for 150 gift items, most of which are on sale.

“There is a trend among customers to finish up gift preparations earlier and enjoying the long break. So we have prepped with more options for those customers,” said Lim Hoon, a food division manager at Shinsegae.

Other department stores, such as Lotte, have similar shipping reservation deals until Aug. 21, and Hyundai Department Store will have Chuseok gift certificates.