Who’s No. 1 in China’s smartphone market? Xiaomi, that’s who

Who’s No. 1 in China’s smartphone market? Xiaomi, that’s who 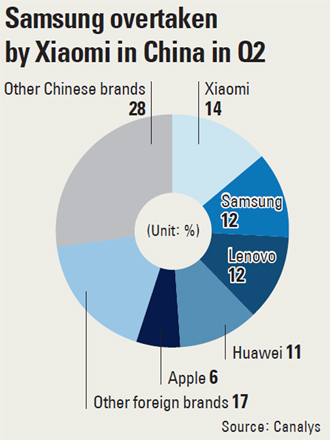 Struggling to maintain its world No. 1 smartphone ranking, Samsung is now No. 2 in market share in China.

Xiaomi had 14 percent of the Chinese market, compared to 12 percent for Samsung, according to the research firm.

“This is a phenomenal achievement for Xiaomi,” said Wang Jingwen of Canalys. “Undoubtedly, this was helped by an anticipated, temporarily under-strength Samsung performance during the quarter.”

Canalys also reported that Chinese manufacturers including Xiaomi, Huawei and Lenovo accounted for 65 percent of all the smartphones sold in China from April through June.

Samsung and Apple were the only non-Chinese companies among the top 10 smartphone brands in China.

Xiaomi, which accounted for 5 percent of the Chinese market a year ago, sold 15 million smartphones in the second quarter, compared to 13.2 million for Samsung.

While Xiaomi’s latest Mi4, which costs $299, is slightly behind Samsung’s flagship Galaxy S5 in sales, its performance compared for its price has been rated by experts and the media as excellent.

In the global market, Xiaomi is the fifth-largest smartphone maker and 97 percent of its products are sold in China.

The company reportedly has plans to export smartphones to Indonesia, Mexico, Brazil and Russia, with the goal of selling 60 million units this year. It recently expanded to India with its Mi3, priced at $247.

“When Xiaomi moves to expand its sales globally with aggressive promotions, it could pose a direct threat to Samsung and Apple, since the intensified competition will spill over onto the world stage,” said a local market analyst.

In the Canalys report, analyst Chris Jones said Xiaomi took a different approach with its branding, marketing and sales strategy. Nearly all other Chinese handset makers compete based on price.

According to Jones, Xiaomi focused on offering software that consumers could not get with other Android devices and a customized version of Android dubbed Miui, with an OS upgrade every Friday.

After Xiaomi and Samsung, Lenovo was the No. 3 smartphone vendor in China in the second quarter, followed by Yulong and Huawei.

Samsung’s smartphone sales in China in the second quarter decreased to 13.2 million units from 15.5 million during the same period last year.

The story is similar in India, where local manufacturers with low-end products swept past Samsung in mobile phone market share.

According to Counterpoint Technology Market Research in Hong Kong, Indian phone maker Micromax emerged as the No. 1 mobile phone vendor in India with 16.5 percent of the market.

It overtook Samsung, which had a 14.4 percent market share, and Nokia at 10.9 percent.

In the smartphone sector, though, Samsung maintained its No. 1 status with a 25.3 percent share, 6.2 percentage points in front of Micromax.

In the smartphone market, Micromax has surpassed Karbonn, which controls 5.9 percent, Motorola with 4.3 percent and Nokia with 4 percent.

Micromax emerged as the world’s 10th-largest smartphone maker based on its growth in India.