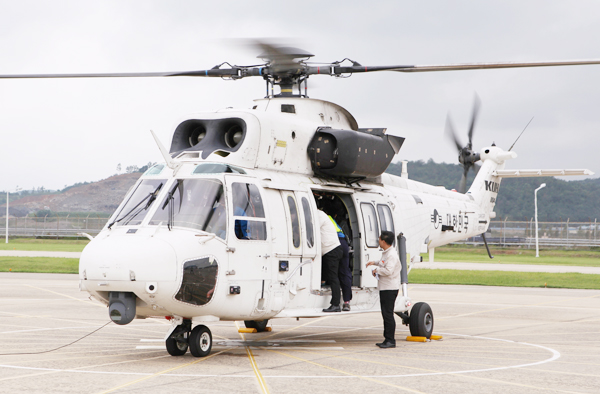 The company said that the medevac helicopter project will cost 32 billion won ($31 million) to develop and 260 billion won for mass production.

KAI plans to finish developing the medevac choppers, which will be used to transport patients to the hospital, by 2016 and put them into operation starting in 2018.

Korea’s sole aircraft manufacturer said that the choppers, which can transport six patients, will be a variant of the Surion, or Korea Utility Helicopter (KUH), which KAI and Eurocopter jointly developed.

In addition to the Surion’s automatic flight control system, forward- looking infrared radar and inertial navigation system, the new medevac chopper will include weather radar and ground collision warning system to enhance its ability to operate at night and in bad weather, KAI said.

It will be also equipped with external patient transferring equipment to be used in areas where choppers can’t easily land, as well as detachable extra fuel tanks to increase its flight range.

“It will have the latest medical equipment to maximize patients’ survival and recovery in the chopper,” said a KAI spokesman. “Adopting a medical evacuation helicopter will boost our military’s combat capability … as well as our ability to help people in disaster situations.”

It is also hoping to secure the bid for the Korean Navy’s maritime operational helicopters (MOH). DAPA already ordered eight AW159 helicopters from United Kingdom’s AgustaWestland but KAI wants the second acquisition to be its Surion-variant helicopter.

“The majority of technology needed for MOH can be interchangeable with our previous helicopters and we can minimize the risk in development,” said a KAI spokesman. “There is also demand, as we think at least 100 units of MOH could be sold.”