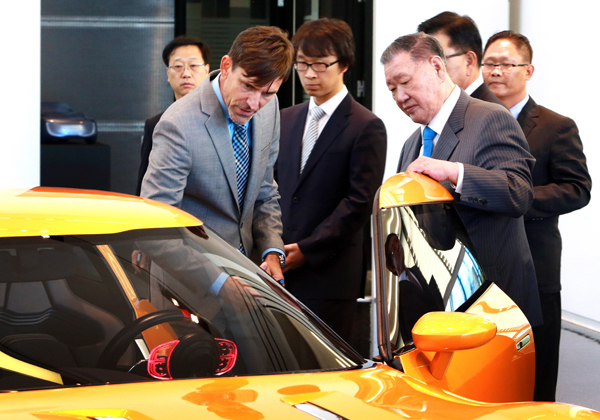 Hyundai Motor Group Chairman Chung Mong-koo has ordered its automakers to increase sales of midsize and large sedans in the United States in a bid to overcome the difficult currency situation.

At the Hyundai Motor America headquarters in Fountain Valley, California, Chung told American executives that the company needs to take pre-emptive measures in the U.S. market, where Japanese brands are boosting their marketing activities due to the weak yen. Japanese automakers combined sold more than 3.6 million units in the United States in the first seven months of 2014, up 6.8 percent from a year ago.

“We can’t ignore our efforts to provide a ‘reasonable price tag’ just because competitors are rolling out discounts,” Chung said. “We will get bigger opportunities if we are not shaken by market changes in the U.S., but calmly counteract in advance.”

The chairman was confident that Hyundai and Kia can increase sales of midsize and large-size sedans in the United States, with the release of a new edition of the Sonata and Genesis.

“If we can overcome the difficult business environment by increasing sales of mid- to large-size cars, we will be able to position ourselves as a brand that can pursue sustainable growth in the U.S.,” Chung said.

Although the Sonata is still behind its rivals Toyota Camry, Honda Accord and Nissan Altima, its sales are steadily increasing. This year, 128,914 Sonatas have been sold in the United States, up 5.8 percent from a year ago.

Genesis sales are also increasing. The premium sedan’s monthly sales were about 800 units earlier this year, but after the second generation was released in May, it is now selling more than 2,000 per month.

Hyundai’s small affiliate Kia is also trying to contribute to the trend with the release of the Cadenza (K7 in Korea) and K900 (K9 in Korea).

“I want employees to work with sense of duty that increasing car sales in overseas is a way to contribute our country’s economy,” Chung said.