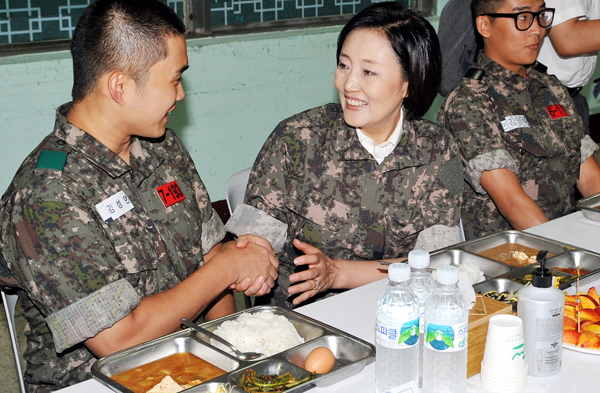 Park Young-sun, an interim chief of the main opposition New Politics Alliance for Democracy, greets a conscript during lunch on a visit to the Nonsan Military Training Camp in South Chungcheong yesterday. By Kim Seong-tae

An interim chief of the New Politics Alliance for Democracy visited the country’s largest military boot camp in Nonsan, South Chungcheong, yesterday, marking her first official activity as acting chairwoman of the party.

The move came amid growing public outrage over the death of an Army private first class, surnamed Yun, in April. The soldier was beaten to death after weeks of physical and emotional abuse at the hands of his superiors at his unit’s barracks in Yeoncheon County, Gyeonggi.

Park said during a discussion session with parents, who were at Nonsan Military Training Camp to attend a training completion ceremony for their sons, that she was there because the NPAD is committed to preventing the tragic deaths of bullied conscripts.

Representative Park Young-sun now runs the 130-member opposition party, which is still reeling from a crushing defeat in the July 30 by-elections. She was accompanied by fellow opposition lawmakers Yoon Hu-duk and Baek Kun-ki, as well as Nonsan’s mayor.

The visit by the TV journalist turned politician was seen as an effort to realize a promise she made the day before that she would seek to achieve the politics of livelihood.

At the graduation session, many parents were upset over the death of Private Yun and expressed worries about their sons attending military service.

“I tried to calm myself down after sending my son to the military by talking to him on the phone five times so far. And then the news [of Yun’s death] broke out,” said Chung Jeom-hee, a 51-year-old mother of a newly enlisted soldier. “I was overwhelmed with worries and fears for my son.”

Yun’s death - a reminder of similar bullying and violence in barracks that have been encouraged or at least tolerated by leaders - strikes a chord with the general public because all able-bodied Korean men between the ages of 18 and 35 face 22 months of compulsory military service.

The brutality Yun endured before he died on April 7 has shocked many, especially parents who are about to send their sons to the military.

Mistrust in the military has also been fueled by the incident.

“The death could have been avoided if those who just stood by had stepped in to help him,” said a mother named Lee Jung-wook, who drove for hours from Geoje, South Gyeongsang, to see her son at the training completion ceremony.

Conscripts are dispatched to their respective units around the country following a ceremony that signals the end of five weeks of boot camp training.

Before her visit, Park said that her party will demand the Blue House sack national security advisor Kim Kwan-jin to take responsibility for the military’s alleged efforts to cover up the death.

“We have no choice but to point out that then-defense minister Kim Kwan-jin was aware of [Yun’s] cause of death,” said Park in a radio interview with MBC yesterday, adding that it would be appropriate for him to step down.