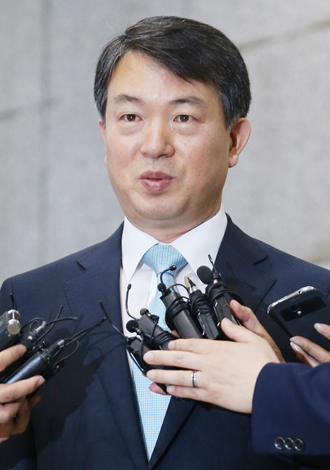 The government yesterday tapped Kang Sin-myeong, the commissioner for the Seoul Metropolitan Police, as the nation’s top police chief to replace Lee Sung-han, who stepped down Tuesday amid public criticism over the botched manhunt for Yoo Byung-eun, the de facto owner of the doomed Sewol ferry.

The Ministry of Security and Public Administration yesterday announced its approval of the nomination of Kang, 50, who currently heads the Seoul Metropolitan Police Agency, to commissioner general of the National Police Agency.

In following with internal procedures, his nomination was first handpicked and proposed by a special nomination committee under the Security Ministry. Kang will still need to pass a confirmation hearing by lawmakers at the National Assembly, scheduled for next week. President Park Geun-hye will give the final confirmation.

If Kang’s nomination is approved, he will become the first police chief in the country to graduate from Korea National Police University since the school opened its first campus 33 years ago.

Kang served in various inner-circle posts within the police. He was the former chief of the National Police Agency’s bureaus on criminal investigation and intelligence, as well as the former head of the Songpa Police Precinct.

He previously served as the Blue House secretary for public security affairs in the Park Geun-hye administration.

According to the Security Ministry, Kang told members of the special nomination committee during a questioning that, “I will become a police [chief] for the people, [one] who does his best and takes responsibility for public security and order.”

If Kang, a Gyeongsang native, is finally appointed as the national police chief, three out of Korea’s four most powerful directors will be from North or South Gyeongsang.

Lee Byung-kee, the director of the National Intelligence Service (NIS), is the only non-Gyeongsang native; he was born in Seoul.

The appointment of Kang came a day after outgoing National Police Agency Chief Lee Sung-han tendered his resignation to the Security Ministry, expressing his desire to take responsibility for the botched attempt to find and arrest Yoo, the de facto owner of the Chonghaejin Marine Company, which operated the Sewol ferry.

In his resignation speech, Lee said he would “embrace all responsibility that the police should take for the various problems,” including the belated discovery of Yoo’s body.

His exit also came just hours after President Park criticized the police and prosecution over their failed efforts to find and arrest the 73-year-old businessman.

At a cabinet meeting on Tuesday, President Park acknowledged that the police and prosecution “wasted a huge amount of the state budget” and “lost the public’s trust.”

“Someone needs to take responsibility for [this case],” she demanded, without pinpointing Lee.

About 1.3 million police officers were mobilized at various times in the manhunt and an unprecedented 500 million won ($486,500) reward was offered for information about him.

Yoo’s body was found on June 12, heavily decomposed and rotting in a plum orchard in Suncheon, South Jeolla. However, authorities only discovered 40 days later that the corpse did, in fact, belong to the fugitive billionaire.