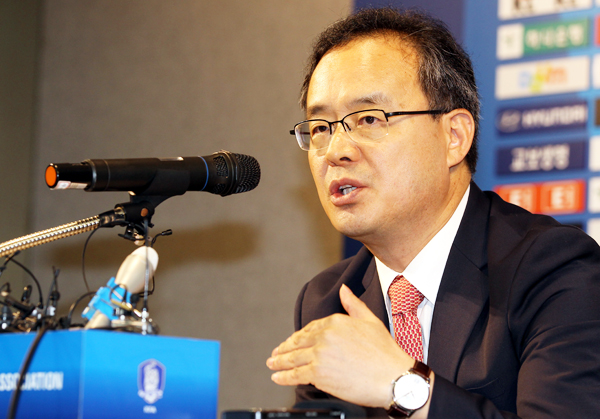 The Korea Football Association (KFA) said Dutch Coach Bert van Marwijk will likely decide whether or not to accept a contract to lead the national team within a week.

In a press briefing yesterday at the KFA’s headquarters in Jongno District, central Seoul, the football governing body’s technical committee chief Lee Yong-soo, who went to Amsterdam to meet the 61-year-old Dutchman, confirmed that there was a discussion between the coach and KFA about the national team job.

“Frankly speaking, nothing regarding the contract has been decided,” Lee told reporters. “It is true that we met Marwijk in the Netherlands on Tuesday local time and discussed the job for about two hours. We expressed our interest and opinions of hiring him as the new leader for the Korean national team with some details, including a salary. He asked us to give him some time to think about the job and I personally think his decision will be made within a week.”

Earlier this week, reports that three high-ranking KFA officials including Lee secretly traveled to the Netherlands roused football fans’ suspicions that the organization would bring in another Dutch coach after Pim Verbeek resigned from the post in July 2007.

Lee said he decided to hold the press briefing because he was worried that the wave of media reports over the past few days might influence the contract.

“I understand that media and fans are highly interested in this issue, but we ask you to wait for the coach’s decision,” he said. “I’m not able to speak about details of the contract we offered to Marwijk because it is in the middle of the process, but I can say that he was highly interested in working in Korea and knew about the [Korean] team and its players much more than we thought when we were discussing the job.”

Lee added that Marwijk was the only candidate they met on their trip. Some reports said that the officials might have met other potential coaches after the Dutchman, but it looks like they’re focusing their efforts on Marwijk.

“The reason we met only one person on this trip was because the meeting with Marwijk was arranged much faster than we expected,” Lee said. “We haven’t arranged a meeting with the other two candidates yet. Just like many media outlets reported, the coach had done a great job in the 2010 South Africa World Cup by leading the Netherlands to a second-place finish and also has made some achievements in club teams, which is why he was on the top of our list.”

The other candidates are reported to be Fernando Santos of Portugal and Jose Antonio Camacho of Spain.