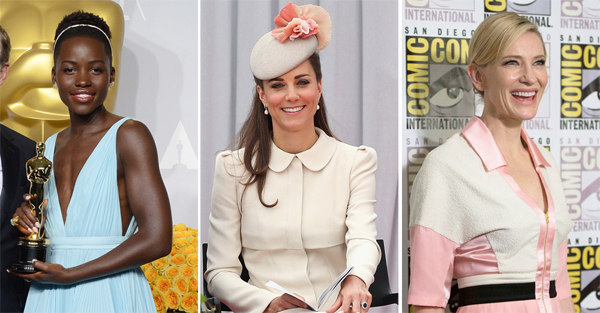 From left: Lupita Nyong’o poses during the Oscars on March 2, 2014; Kate Middleton, Duchess of Cambridge, attends a ceremony commemorating World War I in Liege, Belgium, on Monday; Cate Blanchett poses during the 2014 Comic-Con International in San Diego, California, on July 26, 2014. Blanchett and Nyong’o, both Oscar-winning actresses and favorites on Hollywood’s red carpet, made Vanity Fair’s 2014 international best-dressed list and Britain’s Duchess of Cambridge was named to its Hall of Fame. [AP, REUTERS/NEWSIS, NEWS1]

NEW YORK - Cate Blanchett and Lupita Nyong’o, both Oscar-winning actresses and favorites on Hollywood’s red carpet, made Vanity Fair’s 2014 international best-dressed list on Wednesday and Britain’s Duchess of Cambridge, Kate Middleton, was named to its Hall of Fame.

It is Blanchett’s second appearance and the first for Nyong’o on the annual list, which does not rank its fashion stars. The style setters list is dominated by actors, but it also includes European royals, sports stars and artists.

Princess Mary of Denmark, Queen Maxima of the Netherlands and “Downton Abbey” actress Michelle Dockery were noted for their style, along with artist Jeff Koons, New York Giant football wide receiver Victor Cruz and Grammy-winning musician Pharrell Williams. Williams, on the list for a second time, named actor Johnny Depp as his style icon, while Cruz said he admired Williams for his style.

Although Nyong’o has been praised for her fashion flair, when asked to name her favorite places to shop she told the magazine: “Nowhere. I dislike shopping.”

The Duchess of Cambridge, a fixture of the list for four years, will be joined in the magazine’s best-dressed Hall of Fame by German fashion designer Karl Lagerfeld.