A golden age for sisters in music business

A golden age for sisters in music business 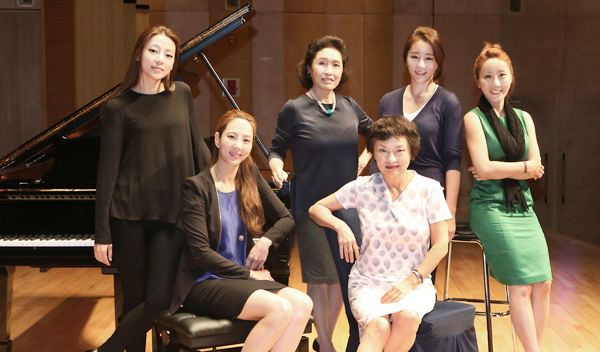 Three sets of sisters who grew up supporting each other gather together. From left: Clara-Jumi Kang, Kang Yumi, Chung Myung-wha, Chung Kyung-wha, Shin Zia and Shin A-rah. The sisters all agree that they have different styles but are always on the same team. Provided by the Great Mountains Festival and School

“It’s easier to perform when seated near the edge [of the stage], but my sister told me to take the center spot,” said cellist Chung Myung-wha, 70, during a phone conversation last Tuesday as she reminisced about playing Tchaikovsky’s string sextet at the Great Mountains Festival and School held last month.

While checking the sound during a pre-show rehearsal, her younger sister, Chung Kyung-wha, 66, advised Myung-wha to move to the center of the six players.

The younger sibling always accompanies Myung-wha’s performance and also points out flaws others couldn’t. It works vice versa as well.

The older sister also participates in almost all of the younger sister’s rehearsals. “There’s no better companion than this when playing music,” said Myung-hwa.

It’s not only the Chung sisters who do this. The Kang sisters and the Shin Sisters actively perform, too.

The Chung sisters studied abroad in New York during the 1960s and grew up sharing a small house and taking turns practicing their instruments.

The Shin sisters, Shin A-rah, 31, and Shin Zia, 27, who play violin, have also always depended on one other. When A-rah won an international award in 2006, she gave the prize money to her younger sister. The money was later used for Zi-a’s plane ticket to enter a competition. “Because we both know the hard paths we are taking, we always end up helping each other,” said A-rah.

“When practice was over, she always accompanied my solo performance. Sometimes I worried she didn’t have enough time of her own,” said younger sister Jumi.

She added that she was able to grow musically thanks to her older sister’s keen hearing. Yumi now also works as a professional accompanist.

The three sets of siblings share something in common: The older sisters are generally generous and easygoing while the younger sisters are relatively sensitive and strong.

The Chung sisters use their personalities to master cello and violin. While Clara-Jumi Kang’s performance is full of power, her older sister, Kang Yumi, is a flexible player who promptly adjusts to the soloist.

The same goes for the Shins. The eldest, A-rah, performs in an orchestra while the youngest made her name as an impressive soloist. “I think some similarities appear in sisters who have done music for a long time,” explained Chung Myung-wha.

The three sister duos recently made an appearance at the 11th Great Mountains Music Festival and School.

“It seemed like watching a condensed form of a musical field where the sister force is incredible,” said Ku Sam-yeol, standing advisor of the music festival.

At this year’s festival, pianist Son Yeol-eum’s younger sister Sae-eun, 22, participated as an intern. Sae-eun is a student majoring in Art Management.

“She’s an exceptional talent who won’t need to borrow her sister’s name to be successful in the art community,” said Ku on Sae-eun.

• Chung Myung-wha is a cellist who was born in 1944. She studied at Juilliard and the University of Southern California under international musicians. She also won the Geneva International Music Competition in 1971

• Chung Kyung-wha is a violinist born in 1948. She won the Edgar Leventritt Competition at 19 and played with the London Symphony and the New York Philharmonic during the 1970s.


2. Prodigies in the spotlight

• Kang Yumi is a pianist born in 1980. She majored in both piano and violin at Germany’s Mannheim Musikhochschule and Juilliard. After graduating from the Seoul National University College of Music she began working as an active accompanist and soloist.

• Clara-Jumi Kang is a violinist born in 1987 who entered the Mannheim Musikhochschule at the age of 4. She won first prize in the International Violin Competition of Indianapolis.

• Shin Zia is a violinist born in 1983. She won third prize in Queen Elisabeth Music Competition and first place in the Long?Thibaud?Crespin Competition. The soloist’s musical talents range from Bach to folk music.