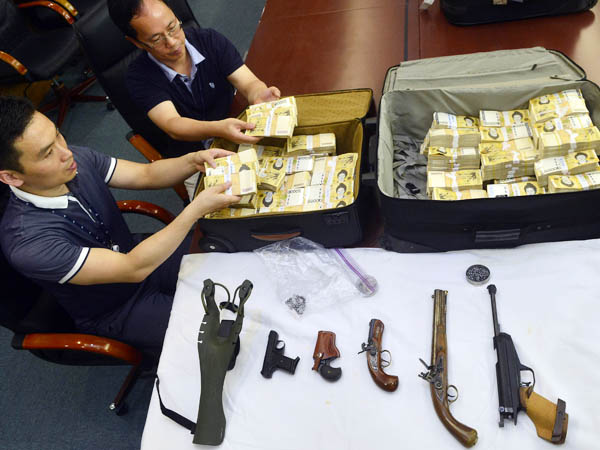 The prosecution announced yesterday that they cannot legally prosecute Yoo Byung-eun, the late patriarch of the family behind the doomed Sewol ferry, but will continue to search for and seize his and his family’s assets.

“We found that Yoo embezzled 129.1 billion won ($125.5 million) from his affiliates by selling his photographs at high prices and copyrighting the trademarks used by his affiliates,” said Lee Heon-sang, the prosecutor who led the investigation. “He also evaded paying 15.9 billion won in taxes.”

Authorities added in a briefing yesterday, when they released the interim results of their investigation, that they had given up on indicting him after it was discovered that the dead body found on June 12 in a field in Suncheon, South Jeolla, was actually Yoo. The 73-year-old had been accused of embezzlement, tax evasion and irresponsible business practices that ultimately led to the ship’s sinking in April.

Investigators also concluded that the money Yoo’s family had embezzled and siphoned off from his business affiliates and the Evangelical Baptist Church - the religious sect he co-founded with his father-in-law in the 1960s - amounted to 179.3 billion won.

Lee also said they would, however, prosecute Yoo’s oldest son, Yoo Dae-gyun, over embezzlement and business malpractice allegations as well as two others who allegedly assisted Dae-gyun while he was on the run.

Yoo Dae-gyun is believed to have misappropriated 7.3 billion won, including 3.5 billion won from the Chonghaejin Marine Company, which operated the Sewol ferry.

His two aides, Park Soo-kyung, 34, and Ha Bo-eun, 35, are believed to have helped him while he was evading authorities. Park was reportedly staying with Dae-gyun in a residence in Yongin, Gyeonggi, until they were arrested by police on July 25. Ha, who formerly lived there, was arrested on the same day and is alleged to have provided food and refuge.

Lee added that prosecutors are also investigating Oh Gabriel, 60, a former ambassador to the Czech Republic, for allegedly aiding Yoo by looking for hideouts and contacting him about how the police and prosecution were chasing after him and how Yoo’s aides were preparing his escape plan.

The prosecution has already said it will further investigate Yang Hoe-jeong, the elder Yoo’s 55-year-old chauffeur, and Kim Myung-sook, 59, another of the business tycoon’s key aides who prepared his food and cooked his meals.

On Monday, investigators also found numbered sacks containing five pistols and 15 billion won in cash at the residence of one of Kim’s relatives. The pistols were not loaded, officials confirmed, though dozens of rounds of ammunition and lead beads were found with the guns.

The prosecution also launched a special team to confiscate the Yoo family’s hidden wealth, which include stocks, properties and real estate overseas. Authorities have so far seized 124.4 billion won worth of his assets so far.

But it still lags far behind in repaying the money the government spent on handling the Sewol ferry accident and its aftermath.

The government has promised to hold the Yoo family responsible for the expenditure, which is estimated to be between 400 billion won and 600 billion won, when considering compensation for the families of the victims and the cost of recovering the Sewol.

The prosecution said it will also collaborate with the U.S. Department of Homeland Security to seize Yoo’s assets overseas.