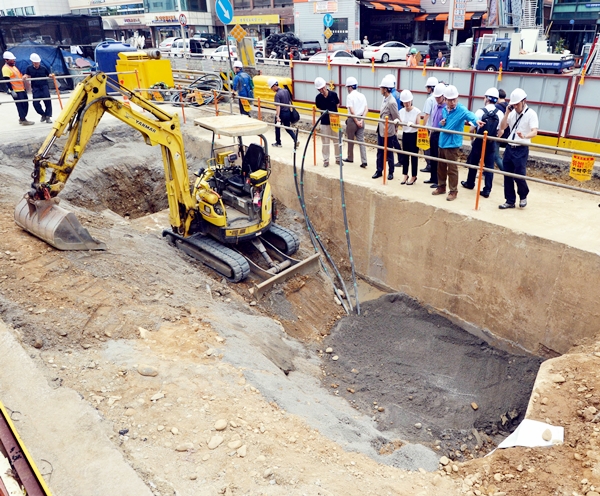 Officials from the city government and reporters yesterday take a look at maintenance efforts for a sinkhole that formed Aug. 5 on the western entrance of the Seokchon Underpass in Songpa District, southeastern Seoul. [NEWSIS]

The sinkhole that formed on Aug. 5 at the western entrance of the Seokchon Underpass in Songpa District, southeastern Seoul, likely resulted from underground tunnel construction for subway line No. 9, the Seoul Metropolitan Government said yesterday in an interim report.

The size of the hole in the road was initially thought to be 1 meter (3.28 feet) by 1.5 meters, and 3 meters deep, though local authorities yesterday said the total vacant area underneath the road was 2.5 meters by 8 meters, and 5 meters deep. “We suspect that the operation of the Shield TBM [Tunnel Boring Machine] used to build the subway tunnel underneath the underpass created the sinkhole,” said Professor Park Chang-geun, from Kwandong University, who led the investigative team comprised of 11 experts.

A Shield TBM spins a cylindrical shield that grinds sand and rocks to excavate straight tunnels. It is commonly used as an alternative to drilling.

The ground underneath the underpass is partially bedrock as well as soft soils, and boring tunnels in such an area is unprecedented in Korea, Park said. “Experts believe the most dangerous environment in which to excavate is one in which bedrock and soft soils are both present. We told the city government to conduct a close examination because it is possible the shield may have created empty pockets.”

On Wednesday, investigators discovered an additional 80-meter-long empty pocket under the underpass, with a width of 5 to 8 meters and a depth of 4 to 5 meters. It is also suspected to have been created as the result of underground tunnel construction.

“The second vacant area looked like a large cave, and it could have collapsed at any time,” Park said. “If it was left undiscovered and collapsed, it would have had huge impact on society.”

Later yesterday, 25 pillars supporting the underpass that were located inside the bigger pocket were found to have cracked slightly. The city government assessed that it could develop into a concern if the ground further subsides and stopped further construction on the subway line in the area.

The sinkhole found on Aug. 5 also raised concerns that the Lotte World Tower complex, which is being built only 1 kilometer (0.62 mile) away from the underpass, is causing ground subsidence, in which the earth shifts downward. Investigators tentatively concluded that it was not related to the construction of the tower, but said they will conduct further investigation.

The city government closed the Seokchon Underpass on Wednesday and said it will reopen it in September after maintenance work is finished.