‘Roaring’ on a record-breaking roll

‘Roaring’ on a record-breaking roll 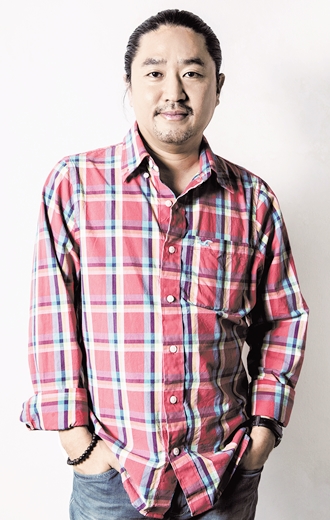 The movie “The Admiral: Roaring Currents” continues to break records. It became the most-viewed among all domestic and foreign movies released in Korea on Saturday, 18 days after its release. As of yesterday morning, more than 14 million tickets had been sold in total.

As the epic film is still attracting hundreds of thousands of theatergoers per day, people are curious about what further accomplishments “Roaring Currents” can meet.

The JoongAng Ilbo, an affiliate of the Korea JoongAng Daily, met director Kim Han-min, 45, who led a “battleground-like filming site” to complete the film.

For Kim, “Roaring Currents,” his second period film after “War of the Arrows” (2011), is a work he had planned for a long time.

A. Everyone says they are having a hard time living in this country. Class conflicts are worsening and the education system is distorted. There needs to be a focal point to unite everyone, and I thought I could use a certain person’s story to do this. I decided Adm. Yi Sun-sin could be this person. I thought sharing his story could contribute to enhancing society. 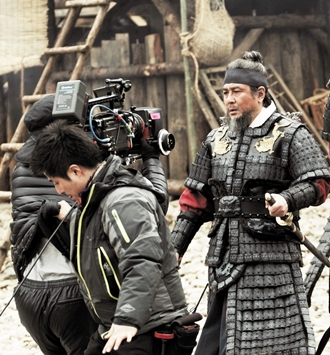 Director Kim Han-min, left, and actor Choi Min-sik, who plays the role of Adm. Yi Sun-sin, on location for the epic “The Admiral: Roaring Currents,” a record-breaking movie.


What’s the reason behind choosing the Battle of Myeongnyang?

It’s a very dramatic battle. In other words, it was a battle full of pressure. When a person is under pressure I think it’s only natural that their innate mentality is revealed. The Battle of Myeongnyang is where the admiral’s essential traits of self-conquest and sacrifice were shown. I thought a lot of people would be touched by his sincerity.

Choi Min-sik said he felt like he couldn’t completely figure out Admiral Yi’s inner thoughts. How was it for you?

I only focused on how I could deliver and amplify the respect I have for the admiral. Yi was a man who was detached from the concept of life and death. After being deprived of the Naval Commander of the Three Provinces position and then reappointed, it would be impossible not to become detached from life and death when trying to fix a situation that can’t be fixed, and fight against Japanese invaders. His mind was probably full of determination and love for his country and people. Facing him up front was the only way to properly portray such a character. I don’t know how else I could have made the film. I just tried my best to convey this heavy topic in a rather clear and easy manner.

There are a lot of camera angles that emphasize Admiral Yi’s dignified manner. Was that intentional?

Even among the staff we laughed saying, “This looks exactly like the statue of Admiral Yi at Gwanghwamun!” Those around me were concerned he was being portrayed too much as a saint. But the camera naturally just went like that. I didn’t want to try filming it another way. I hope it didn’t seem too much like the movie was trying to force a lesson. 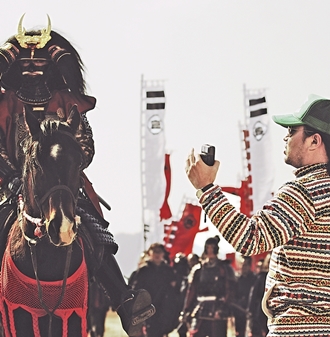 Director Kim, right, talks about acting with actor Ryu Seung-ryong on a horse while playing the role of Japanese pirate-turned-admiral Kurushima Michifusa.


The naval battle scene has had good reviews. Why do you think that is?

When I told people I planned to focus half the film on the naval battle scene, a lot of people said that sounded boring; they couldn’t grasp how the scene would turn out. I thought time was needed to properly show the admiral’s tactics. I didn’t want to divide the drama and the naval battle - those are two factors that can’t be separated when describing Admiral Yi, as the character becomes ultimately complete at the naval battle. I think this is when the audience is moved by Admiral Yi and comes to completely understand him. I think misconceptions about the movie stem from thinking of the naval battle scene as mere entertainment.

The choongpa (a technique of clashing two boats to submerge the other) scene is very new. How was it filmed?

That was a really difficult scene. I kept yelling, “Say it’s possible!” to the staff - the admiral’s line in the scene. Then the staff would reply “That could kill us!” - like the frightened soldiers who run away in the movie - or “The movie will fail!” [laughs].

The site’s construction and the actual filming was an extremely difficult process. During shooting, each prop on deck was individually attached with a wire and shook with use of a gimbal while strings were also attached to pull them from above.

I think the scene came out quite nicely with the CGI [computer generated imagery] of swirling seawater layered on top. I feel like the movie’s naval battle scene has contributed to our nation’s CGI development. The fact that this type of technology is shown in a Yi Sun-sin film, especially in a film about his quintessential battle at Myeongnyang, means a lot. 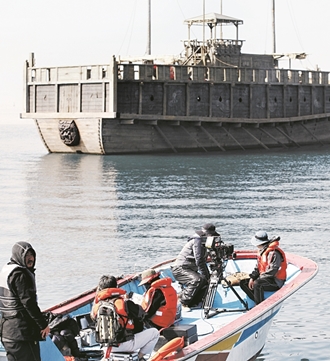 Director Kim and other staff members film the naval battle - the movie’s main event - from a boat. A life-size reproduction of a Joseon naval ship is in the background.


It took more than a year to film the latter half of the movie. What was the most difficult part?

It would have to be the CGI once again. We were still in the process of editing, even during the press promotion, but we finally finished. The CGI company Macro Graph really went through hard work. It took so long, but it also feels very short. I still can’t believe it’s come to an end after all of my mutters of the movie line, “There is no end, there is no end.”

I feel like you were confident about the filming process. Would you agree?

It was more like the pressure to make the right film. I was very clear about the traits of the admiral I wanted to convey, so I didn’t think I could mess it up. I told the staff constantly that the film needed to be well made so that elementary to high school students can remember Admiral Yi through this film. I think a lot of people involved in the making of the film were unknowingly motivated by that.

Do you have any future plans to make films about Admiral Yi’s other battles?

I aspire to make “Hansan” and “Noryang.” I don’t want to make them sequels to “Roaring Currents” because the Great Battle of Hansan and the Naval Sea Battle of Noryang each has its own meaning. Hansan was a naval battle where we fought against Japanese invaders with 54 giant Panokseon (“board roofed” ship) and the Turtle Ship under an organized formation. Noyrang was the most intense naval battle and it also happened at night. It’s also the battle where the admiral passed away.


Aren’t there other historical figures and events to turn into movies? Why did you choose Admiral Yi in particular?

I don’t think there’s a figure like Admiral Yi who transcends all generations and classes. Films about Gang Gam-chan [a medieval Korean government official] or Eulji Mundeok [a seventh-century military leader] would just feel too didactic. Admiral Yi feels more like a figure capable of carrying depth in a film. From life and death, power and politics, and even to the international state of affairs, he seems closely related to the current time period. Admiral Yi will be the most meaningful person to me for a long time.