Coin minting continues despite reduced use

Coin minting continues despite reduced use 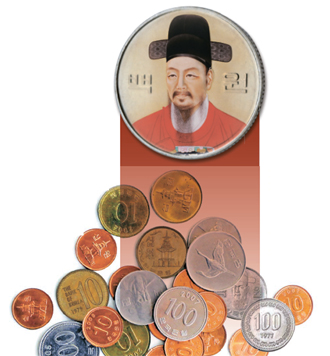 Kang Jeon-hwan, 62, has been driving his cab in Seoul for more than 30 years. Every morning, he makes sure he has 50 to 80 coins worth 100 won (10 cents) with him before he switches on the ignition.

“Because the cab fee breaks down to 100 won, we need the coins,” Kang said. “But less than 10 of the 100 won coins are gone by the end of the day because eight out of 10 customers today pay their fees using credit cards. In the last five years, [the number of] customers paying with credit cards has been growing.”

In the past, without 100 won coins stacked up in their taxis, drivers would have trouble making change. Kang said that even when he broke a 10,000 won note to get 100 won coins, his supply would quickly run dry.

He said it was common to see taxi drivers running into stores next to bus stops and restaurants to break notes into coins. 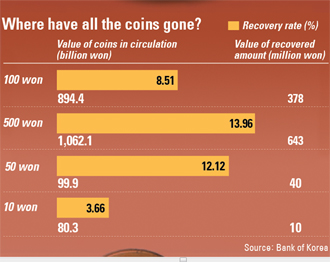 “But those were the old days,” Kang said. “Today, when we hand the rest of the fee in 100 won coins, they don’t like it much because it’s heavy to carry around. Some even ask for change in 500 won coins.”

Kim Seon-mi, a 31-year-old elementary school teacher in Cheonan, South Chungcheong, is one of the few people who still prefer to use cash over credit cards.

She says she sticks to the old-fashioned payment because it is a good way to save money. But when Kim goes shopping near her home and makes a purchase resulting in change that includes 100 won or 10 won coins, the cashier always asks her if she wants to put the change toward her shopping card points rather than just give her the money.

Kim said that her students at school wouldn’t even bother picking up 10 or 50 won coins lying on the floor.

“Unlike adults, children have more use for small change, yet it seems that they don’t think of 10 or 50 won coins as money,” the teacher said. She speculated that students cared less about coins because other than small stationary items, most products aimed at kids today including packets of crackers or cookies, cost at least 1,000 won.

However, while the number of 100 won pieces in the market is at a record high, it’s less common to see them being traded from one hand to another.

So rather than being circulated in the market, 100 won coins are more likely to be hidden away, under the sofa at home or on the floor at a shop.

Last month, the central bank minted 44.4 million 100 won coins, the most in nine months, but it only re-collected 3.8 million of the coins.

The recovery rate of the 100 won piece is only 8.5 percent, which means that when 100 of the coins are issued into the market, less than nine are recovered.

Even the return rate of the 50,000 won note, which is considered the most commonly used currency for illegal trading, is 20 to 30 percent.

The situation is similar or worse for other coins as well. The recovery of the 500 won coin is 14 percent, the highest among all coins in circulation. The rate on 50 won is 12.1 percent, while the 10 won coin fares worse at 3.7 percent.

Although the central bank continues to mint the coins, they are disappearing for two major reasons - increased use of credit and debit cards and the relatively low value of the won as hard currency.

The central bank decides how many new notes or coins it will issue based on their return rate.

“Because there is continuous demand for small change, we can’t reduce the minting of coins the way we want,” said Na Sang-wook, head of currency issuance at the BOK. “Because the recovery rate of the 100 won coin is low, we have to keep increasing the number that we mint.”

The cost of minting these coins is a burden on the central bank and the Korea Minting Security Printing & ID Card Operating Corporation. Each year, the BOK spends roughly 60 billion won on churning out new coins.

The number of coins from 10 won to 500 won that could not be used because of corrosion or distortion amounted to more than 15.4 million pieces worth 1.4 billion won.

The 10 won coin causes the most problems.

Last week, a woman in her 50s was caught trying to sell copper ingot made out of melted 10 won coins that were minted between July 1970 and November 2006. The coin is 65 percent copper and 35 percent zinc. The woman bought 4 million won worth of the 10 won pieces from a collector and melted them at a foundry in Pocheon, Gyeonggi, before trying to sell it off as copper.

A similar crime was first committed when copper prices jumped in October 2010. In the past, most damages to 10 won coins arose from attempts of turning them into accessories like necklaces.

In 2011, the law was revised to meet the changing environment. Today, damage including melting coins is illegal and is punishable by a prison term of up to three years or a fine of up to 30 million won.

“The damage on coins and currencies is relatively less than in other countries, as the public awareness over criminal charges is high and the penalties for counterfeit and damage to hard currencies are strong,” said Chung Sang-deok, a BOK official.

Because of the rising cost of making 10 won coins, the central bank has made some changes. The coins minted since 2006 are only 48 percent copper and 52 percent zinc, and are smaller and lighter than the old 10 won coins. But the cost is still a burden.

“The material cost of a 10 won coin is 22 won, which exceeds the value of the coin itself,” said Chung, adding that the amount increases when adding in manufacturing and distribution costs. 